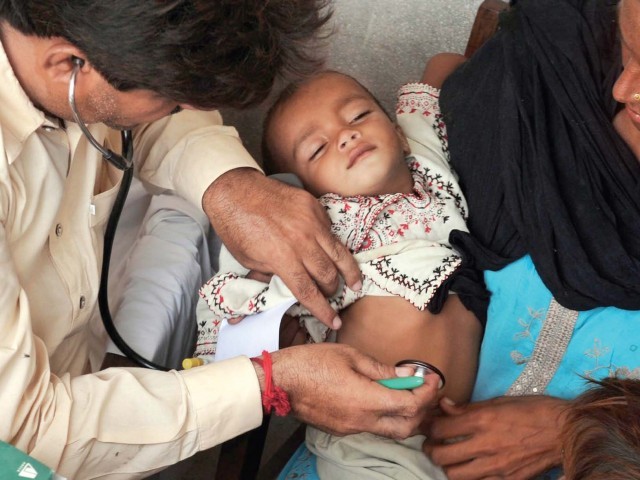 A Pakistani doctor examines a sick child held by her mother at a medical clinic in Rojhan Mazari. Officials warn that millions are at risk from food shortages and disease. PHOTO: AFP

ISLAMABAD: India on Tuesday announced an additional amount of $20 million in aid for Pakistan’s flood victims, a move Pakistan said would ease tensions between the nuclear-armed neighbours. New Delhi has already pledged $5 million for those affected by floods.

Indian Foreign Minister S M Krishna told his parliament that a fresh instalment of $20 million would boost India’s aid contributions for Pakistan to $25 million. “As a more concrete assessment of the damage inflicted by this natural disaster and the urgent needs of the people of Pakistan emerges, the government has decided to increase its assistance to Pakistan from five million dollars,” he said.

The Foreign Office spokesman said the fresh Indian assistance would come through the United Nations. Basit hoped that this development would ease tension between the two neighbours, as they look to get a stalled peace process back on track.

“This gesture may not help resolve the hard issues the two countries are facing. But it will certainly improve the atmosphere,” was his response when asked about the impact of the Indian move.

Last week, Pakistan refused to accept $5 million aid directly and asked India to send it through the United Nations.

Islamabad would not publicly cite any reasons for not accepting the aid directly.

But official sources said strained ties between the two countries made it impossible for Pakistan to take the Indian aid directly.

Basit said during the telephonic conversation with the foreign secretary, the Indian high commissioner thanked Pakistan for releasing 442 Indian fishermen.

A first batch of 100 Indian fishermen was handed over to the Indian authorities at Wagha Border on Tuesday, a day after they were released from a Karachi prison.

Meanwhile, Denmark on Tuesday also announced it will increase its assistance from $12 million to $22 million for the flood survivors.

The announcement was made by Danish Minister for Development Cooperation Soren Pind, following his visit to a flood relief camp in Nowshera.

He said that Denmark was among the first countries to show their immediate support to Pakistan, and had already donated $12 million to help the flood victims.

Pind, who also met Prime Minister Yousaf Raza Gilani, is visiting Pakistan to get a firsthand impression of the scale of the natural disaster in order to reinforce his country’s assistance.