Two separa­te raids were conduc­ted. ANF has carrie­d out three operat­ions in the past three days.
Published: October 11, 2012
Tweet Email 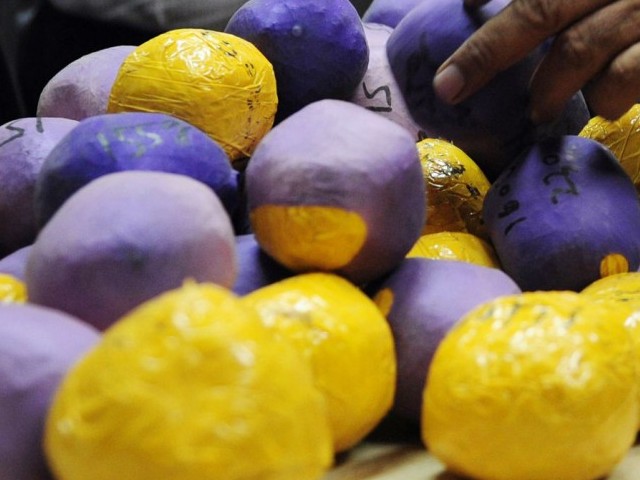 Two separate raid were carried out on Thursday. PHOTO: AFP

ISLAMABAD: The Anti Narcotics Force (ANF) recovered as much as 890 kilograms of opium and hashish following ant-narcotics operations in Balochistan on Thursday.

In a statement issued by the ANF on Thursday, the agency acted on a tip-off that some Afghan based drug traffickers were about to smuggle large quantities of narcotics inside Pakistan, which would in turn be smuggled into Iran.

Anticipating the smugglers, ANF spotted their land cruiser bearing registration number CN6612 coming from Afghanistan. When agency troops tried to encircle the vehicle, the smugglers opened fire on the authorities.

After a heavy fire-fight, the smugglers escaped, leaving behind the narcotics laden loaded vehicle. A subsequent search of the vehicle revealed 530 kilograms of opium stowed in the car.

In another operation, 360 kilograms of hashish was recovered from a deserted hut in Dalbandin. A case has been registered and an investigation has been initiated.

It is noteworthy that during the last three days, the ANF has recovered three large quantities of narcotics in Balochistan. Arms and ammunition have also been recovered.