Interi­or minist­er vows that the state will find terror­ists behind the attack and take strict action agains­t them.
By Ema Anis
Published: October 10, 2012
Tweet Email 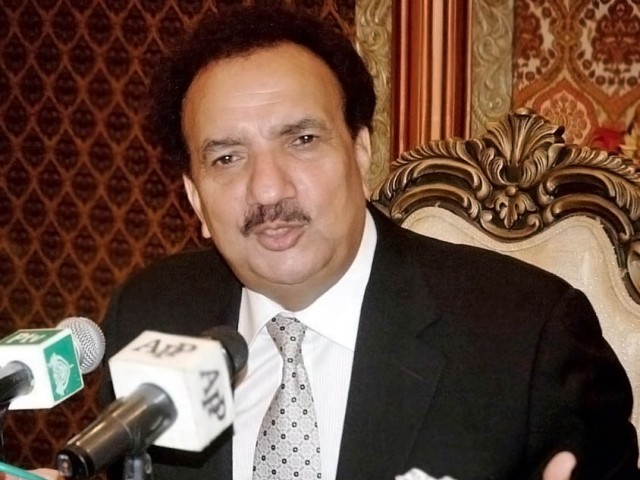 Interior minister vows that the state will find out terrorists behind the attack and take strict action against them. PHOTO: PID/ FILE

PESHAWAR: Interior Minister Rehman Malik, condemning the Taliban attack on Malala Yousafzai, said on Wednesday that he has ordered the IG Police to make permanent security arrangements for the National Peace Award winner.

Speaking to the media in Peshawar, Malik said, “The IG had offered security to them thrice, but Malala’s father refused. He did not want security to be provided and Malala kept moving about alone. But maybe he did not know how valuable his daughter is, how vulnerable she is and how many people are after her life.”

Hoping that Malala’s father will accept the security offer, Malik said that it was the responsibility of the state to provide security to people. “We will even give lady police officials for her.”

The minister vowed that the state will find the terrorists behind the attack and take strict action against them.

He informed the media that Malala was “out of danger” and will not be sent abroad for any further treatment. She is under observation for 48 hours, Malik added.

Thanking all the doctors and surgeons who played their part in Malala’s successful surgery, Malik said that Pakistan was not devoid of good doctors and the nation should not undermine Pakistani doctors. “I am proud of the doctors from the Army and the civilians who have really shown up.”

He also saluted the people of Khyber-Pakhtunkhwa saying that they were the ones who faced the most problems due to terrorism and there was no home left in the province which was unaffected by terrorism.