Chief Justic­e says if Consti­tution is not follow­ed, both the provin­cial and federa­l govts will meet the same fate.
By Muhammad Zafar
Published: October 9, 2012
Tweet Email 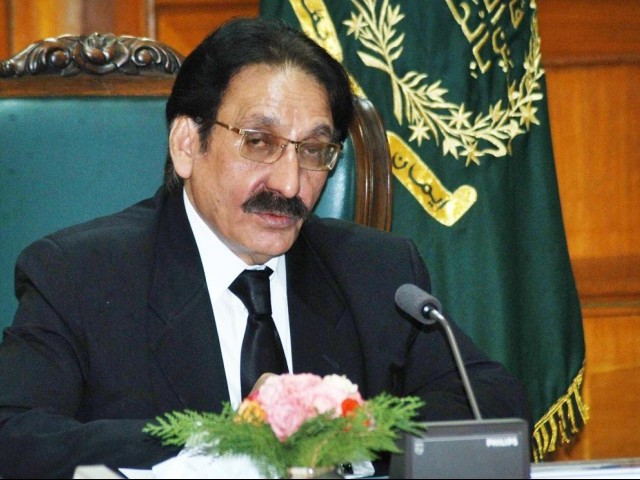 “We had ordered a crackdown against unregistered vehicles, closure on arms, and an end to death squads, but nothing has been done.” says Chief justice. PHOTO: FILE

During a hearing on the law and order situation in Balochistan at the Supreme Court’s Quetta registry, Justice Chaudhry said the government was not serious about addressing the issue. He wondered out loud what law enforcement agencies did while judges, police officers and lawyers besides others were being murdered.

The chief justice appreciated the Army chief’s recent statement in which General Ashfaq Parvez Kayani supported the idea of a political process to appease dissident elements, but stressed the Constitution needed to be adhered to “under any circumstances.”

“The statement is encouraging, but we need to work towards a better and logical response,” he added.

He also questioned authorities why no action was being taken despite existing evidence against the FC. “We had ordered a crackdown against unregistered vehicles, closure on arms, and an end to death squads, but nothing has been done.”

He added the judiciary was refraining from passing any such order, but warned of consequences in case the court’s recommendation continued to  be ignored. “If the Constitution is not acted upon, both the provincial and federal government will meet the same fate.”

Balochistan Assembly Speaker Mohammad Aslam Bhootani, while agreeing that the province had become more volatile recently, defended the FC saying the force was trying to take into account both the court’s observations and the government’s orders.

Expressing concern over why 30 newly-appointed police officers had not been posted in the province yet, Justice Chaudhry asked Balochistan’s IG Police to appoint them as district police officers (DPOs) and submit a progress report to the court.

The court had earlier ordered the appointment of these officers in a bid to better equip the police.

Another judge on the bench, Justice Arif Khilji asked the top cop if there had been any improvements since policing powers had been delegated to the FC, and sought a report in this regard.

The hearing has been adjourned till October 9.