Balakot city: A tale of the forgotten town

Balakot city: A tale of the forgotten town 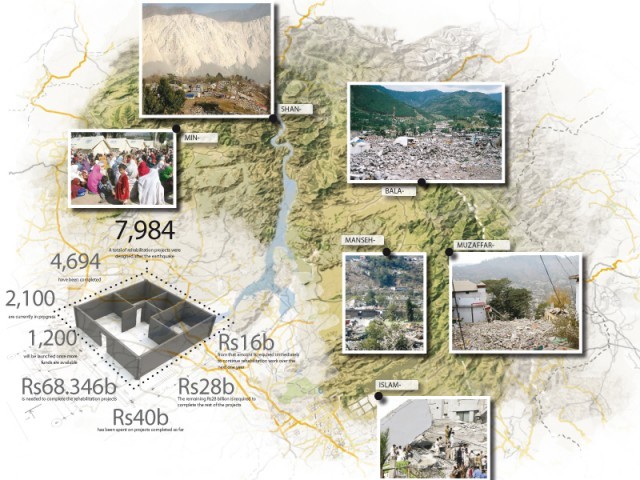 The 2005 earthquake toppled Balakot city into a mesh of rubble.  And seven years later, rehabilitation of the town remains a dream.

The 7.6-magnitude earthquake obliterated 12 union councils of the hillside town of Balakot, which housed approximately 40,000 people.

Despite being showered with aid, authorities have not been able to allocate funds in the right direction. The military operation in Swat and the ongoing floods are often cited as reasons for this rupture.

Locals have announced to stage protest both in Balakot and in front of the Parliament House in Islamabad on Monday to remind the world that seven years later they are still running from pillar to post for their rehabilitation.

Once the relief phase was over, the Earthquake Reconstruction and Rehabilitation Authority (ERRA) – after assessing the volatility of the city with the help of military – took charge and was directed to carry out reconstruction in accordance with a plan devised by NESPAK.

The authority was to give Rs75,000 each to survivors with damaged houses, whereas those with destroyed houses were to be given Rs175,000 each.

However, owing to the complicated design and high cost of construction material, the victims were forced to abandon ERRA’s technical architectural plan, depriving majority of the victims with the third and fourth instalments of compensatory payments.

“People have reconstructed their houses in the union councils on their own. Hundreds are yet to receive compensation,” said Mazar Ali Qasim Shah, former MPA from Balakot. He added that the unsatisfactory performance of ERRA and PERRA is the main reason for delayed reconstruction and rehabilitation efforts in Balakot.

Shah revealed that 50,000 people from the red zone were forced to live in prefabricated houses and compensation of over 1,500 affected villagers are still unsettled in Balakot alone.

When a geological survey of the old Balakot city was carried out for reconstruction purposes in 2006, experts found the presence of two major fault-lines – main boundary thrust and Himalayan frontal thrust – and 14 ruptures under the old Balakot city deeming it highly dangerous for permanent residence.

The relocation of old Balakot was decided in consultation with the provincial government, and local communities agreed to provide land for rebuilding a new town free of cost at Bakriyal, some 20 kilometres south of the old city.

The reconstruction project started in 2007 costing Rs12 billion at an area spread over 11,463 kanals of land and was named New Balakot City where ERRA was supposed to build houses for some 5,000 families.

Furthermore, the Gadaffi Foundation of Libya, according to official records, had pledged $25 million in donation. But due to the political upheaval in the country, the foundation has withdrawn its support suspending various developmental projects.

The New Balakot city project too came to a halt. A dispute arose over the demand of payment to local occupants and owners of land at the new site, who had earlier pledged the land free of cost. Residents of old Balakot city have been living in prefabricated houses donated by the United Nations Development Programme (UNDP).

The deputy director of the New Balakot City Development Authority, Afaq Ahmad, told The Express Tribune that the project was scheduled to be completed by 2010. However, land acquisition disputes and diversion of funds to Swat IDPs and flood victims left it unfinished.

An official source from the ERRA office in Mansehra said that 97,850 housing units out of a total of 106,930 have been completed in the district. He termed the progress satisfactory as it was given an appreciation award from the UN.

Another source at the office of District Reconstruction Unit, Mansehra, termed the progress a success with 63% completion rates. He said a total of 1,221 projects in the education sector were to be reconstructed out of which over 600 have already been completed.