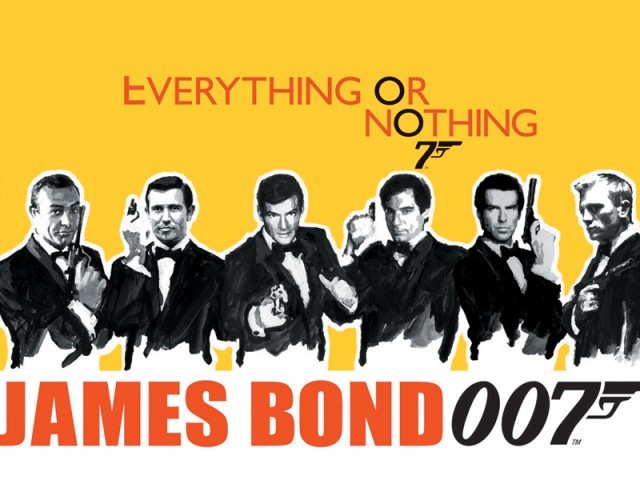 The franchise faced a lot of drama and action over the years. PHOTO: FILE

A new documentary, Everything or Nothing, shows that the real story behind the James Bond film franchise is almost as dramatic as the 007 fantasies themselves — full of twists and turns, personality clashes, heroes, villains, beautiful women and narrow escapes.

Everything or Nothing released in theatres on Friday, branded “Global James Bond Day” to mark 50 years since the world premiere of Dr. No which introduced author Ian Fleming’s suave, sophisticated secret agent to the masses.

The new documentary, directed by Stevan Riley and featuring interviews with five of the six official Bond actors, underlines how the series was not always so secure.

“We’ve been through two bankruptcies of the studio, and we’ve been through various attacks by competing series so we’ve had our ups and downs,” said long-time Bond producer Michael G. Wilson of the franchise’s more serious setbacks.

“And of course we’ve also painted ourselves into a corner a number of times when you have to jump out of it,” he added.

Everything or Nothing director Riley agreed: “Bond always lives to fight another day and there were many threats,” he said, at the film’s London premiere.”I mean, how did Bond survive for 50 years? Everyone takes that very much for granted, but there were many obstacles in the way.”

Sean Connery, the first Bond, tired of being a global celebrity stepped down as well. His departure was to be the first of several major casting choices for the producers that could make or break the series.

In 1983, a face-off between Octopussy starring Moore and Never Say Never Again starring Connery and made by rival producers, became known as the “battle of the Bonds”, and again could have seriously dented Broccoli’s franchise.

Kevin McClory, one of the original writers of Thunderball’s storyline, had long been a thorn in the side of the “official” series and took Fleming to court in 1963 some nine months before the author died.

The six-year gap between Licence to Kill and Pierce Brosnan’s 1995 debut Golden Eye, coincided with the collapse of Communism and much soul searching among the Bond creators over how he could be relevant after the Cold War.

The Brosnan “re-boot” proved to be a hit, and with Broccoli’s health deteriorating, he handed over the reins to Wilson and daughter Barbara who still control the franchise today. Broccoli died in 1996.

“Well, you know, it’s our baby and we feel very, very protective over the Bond franchise,” Broccoli said. “It’s something our father started over 50 years ago and he had great passion for it and we have just been carrying the flame.”