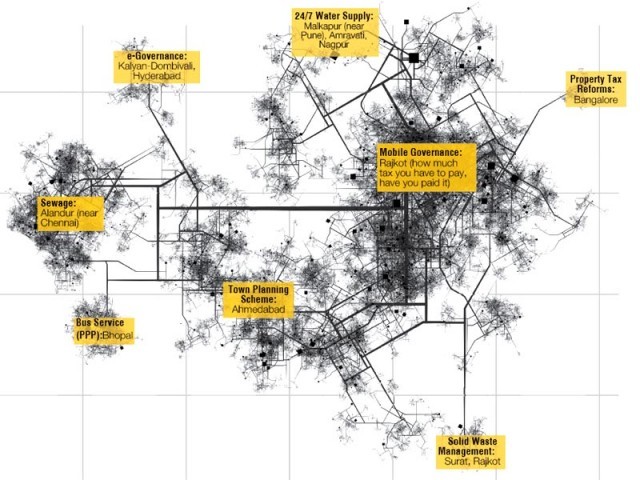 Would it not make sense for the mayors of Karachi, Lahore, Islamabad, Quetta and Peshawar to regularly sit down and exchange notes?

Unfortunately, this happens rarely in Pakistan. But India realised several years ago that this kind of peer-to-peer learning was crucial as city managers struggled to cope with urbanisation. By last year, 377 million Indians were living in urban areas and that was only one-third of the population. As cities expanded, civic services grew spotty, governance became shaky and finances weakened. Development was needed but so were reforms.

In 2005, the government pushed through the Jawaharlal Nehru National Urban Renewal Mission (JnNURM) that combined the carrot and the stick. It gave cities $25 billion for seven years (2005-2012). But in order to get their hands on the money, the national, state and city governments had to sign a deal to make 23 changes. Some of the reforms were simple, like computerising property records, and others were complicated like doing away with the rent control act.

In return, the cities got money for projects. They would get the first cash installment immediately. But the second round of funding was pegged to completed reforms.

JnNURM wrapped up in March this year and the results were surprising. Prof. Chetan Vaidya*, an architect-planner with over 30 years of experience, shared them with a group of international urbanists in Bellagio in July during the Urban Land Institute/Citistates Group summit.

“[In spite of corruption] we could only spend half of the money,” he explained. “The glass is half full and half empty.” Something was not right.

Two years into the programme, the government found that some cities were doing very well but most were not. Sometimes they did not properly identify projects. Sometimes the reforms were not understood. “[Cities] used to hire consultants but even they could not provide the kind of support [that was needed],” said Vaidya. It was a crisis of urban expertise. Mayors and city managers needed help.

This problem gave birth to city-to-city peer learning with the National Institute of Urban Affairs (NIUA) of New Delhi coordinating across 65 cities. It was called Peer Experience and Reflective Learning (PEARL). “When we started six years ago no one sent us information,” recalled Vaidya, who was the NIUA’s director at the time. “We were willing to pay [cities] a small amount for them to employ an academic or an NGO, Rs25,000, [to gather the information] … but they were not interested.”

As an incentive, the JnNURM awards scheme for good practices documentation was launched. Cities that previously ignored Vaidya’s requests for information were suddenly scrambling to please him. “[Officials] would call [me] up and say, ‘Chetan, you don’t worry, we have the money to get it documented. You just send somebody [to take the material]’,” he laughed. The NIUA encouraged them to send the photos, graphs, documents in their regional language and translated the work into Hindi.

“Unless the mayor is going to read [the information] in his own language, he is not willing to believe it,” remarked Vaidya. The material was shared across India.

Mayors needed simple information. Some of the questions were basic, like what should be the terms of reference for a solid waste management project? “[NIUA] would just take it from another city, Xerox it and send it to them or help identify a consultant.”

A meaty newsletter of best practices was prepared. When people complained that it was too thick, the NIUA whittled it down to a four-page newsletter every three months. When commissioners complained they didn’t have the time to read that, they prepared simple postcards.

All of these best practices are online too for the municipal officer, who the NIUA understands is not a high-tech person (indiaurbanportal.in). “We were getting almost 200,000 hits a month,” said Vaidya. One of the most popular sections at one time was ways to plug leaks in the water system.

The peer-to-peer learning was so successful that Vaidya was beating away donors. “This is one programme where I don’t have to ask for money,” he said. “People want to dump money in this. We have support from Cities Alliance which helped set up a knowledge network unit in my institute. The World Bank is engaged in capacity building.”

The NIUA is now working on making this sustainable so that the exchange doesn’t stop if JnNURM stops. And PEARL has to be extended to all of India’s 4,000 cities.

JnNURM II will double the grants, increase the number of cities to focus on small ones and get the private sector involved. But no new projects are being funded if the old ones aren’t completed. The carrot is the stick.

*Chetan Vaidya has since been appointed the director of the School of Planning and Architecture, New Delhi.