Pakistan may tap US gas reserves to quench energy thirst

Pakistan may tap US gas reserves to quench energy thirst

Govern­ment consid­ering invest­ing in shale gas field in US.
By Our Correspondent
Published: October 3, 2012
Tweet Email 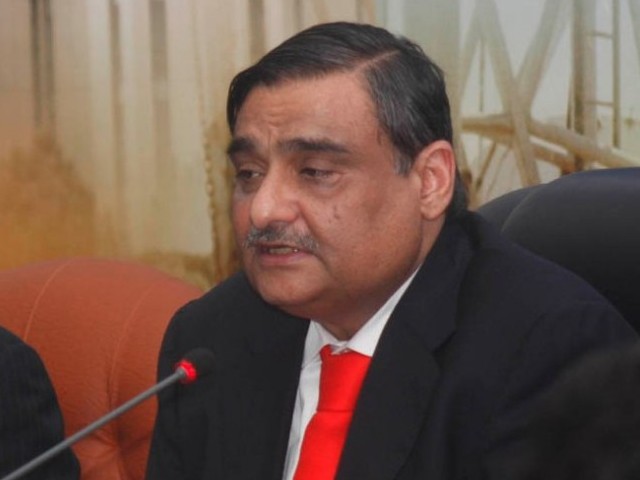 “The government is also looking for exploration activities in Afghanistan, Morocco and the US,” says Dr Asim hussain. PHOTO: PID/FILE

ISLAMABAD: Adviser to the Prime Minister on Petroleum and Natural Resources Dr Asim Hussain has revealed that the government is mulling purchasing a shale gas field in the United States in an effort to tap a cheaper source of energy to meet growing needs of Pakistan.

Addressing a press conference here on Tuesday, Hussain said huge reserves of shale gas had been discovered in the US, “therefore, we are considering investing in a shale gas field to ensure gas supply to Pakistan.”

Discussing Pakistan Petroleum Limited’s (PPL) interest in Iraq, he stressed that the company would explore oil and gas reserves there as the Iraqi cabinet had approved the award of a block to PPL, which it had won in bidding.

“The government is also looking for exploration activities in Afghanistan, Morocco and the US,” he said.

Hussain said the government had planned to add one billion cubic feet of gas per day (bcfd) from local sources by the fourth quarter of next year.

In addition to this, the petroleum ministry has sent a summary to the Economic Coordination Committee (ECC) of the cabinet, proposing import of 1 bcfd of liquefied natural gas (LNG). In this programme, 200 mmcfd of LNG will be imported on fast track and 800 mmcfd will be purchased under long-term arrangements.

Acknowledging that winter this year would be tough in terms of gas shortfall, Hussain stressed that the shortage would be manageable through implementing a load management programme.

He claimed that the gas shortfall would come to an end in two years as the government was making all possible efforts to overcome the crisis.

Following the approval of Petroleum Policy 2012, he said, gas exploration and production companies had accelerated their activities. ENI has discovered reserves of 300 to 400 billion cubic feet and 30 mmcfd will flow every day from this point.

Hussain said the government had cancelled licences of four blocks, which were not performing well and exploration work there was poor. On the other hand, 52 blocks have been auctioned in the last four years.

The Oil and Gas Development Company (OGDC) will explore 36 wells in a year and oil production is expected to increase to 100,000 barrels per day by April next year.

In order to highlight incentives in the new policy and attract investment in oil and gas exploration, the government has planned to conduct road shows in different places including Dubai, London and Houston.

Talking about Turkmenistan-Afghanistan-Pakistan-India (TAPI) gas pipeline project, Hussain said negotiations were going on and soon things would be settled.

He also said Pakistan State Oil (PSO) would set up an oil refinery in Khyber-Pakhtunkhwa.

Hussain rejected a suggestion from the Pakistan Muslim League-Nawaz (PML-N) that oil prices should be revised once in a month in order
to provide relief to the consumers, terming it an attempt “to put Pakistan into darkness”.

Leader of Opposition in the National Assembly Chaudhry Nisar Ali Khan of PML-N had stated in the house that they would move a resolution for replacing the current weekly review of oil prices with a monthly review.

However, Hussain declared that the government would not change the current mechanism, arguing all over the world fuel prices were revised every day.

Liberalised trade: for better or for worse?