Many PPP member­s compla­in of PPP's capitu­lation to MQM, and on Monday they looked more defeat­ed than the protes­ters.
By Saba Imtiaz
Published: October 2, 2012
Tweet Email 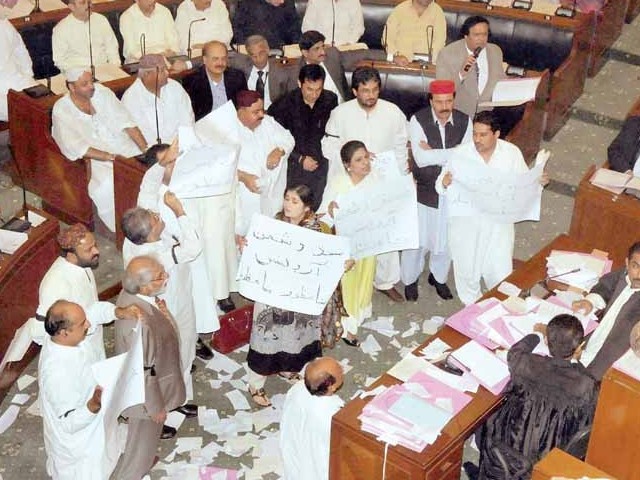 In the Sindh Assembly, former allies of the ruling party protested against the new local government system as it was presented on Monday. The placards held by the lawmakers read: “Anti-Sindh Ordinance Unacceptable”. PHOTO: RASHID AJMERI/EXPRESS

It’s finally here! The much-criticised and obsessed about focus of so many, many, many meetings over the past three years, the Sindh Peoples Local Government Ordinance was passed by the Sindh Assembly on Monday, against the backdrop of loud chanting of MPAs with nationalist credentials.

The making-agendas-into-confetti and black armband brouhaha aside, it was actually far more fun to compare the looks of pure glee sported by the Muttahida Qaumi Movement (MQM) members and the near-silence by the majority of the Pakistan Peoples Party’s (PPP) representatives in the assembly. They may be coalition partners, but perhaps the chants of ‘traitor, traitor’ and ‘selling Sindh out’ got under the PPP skin as many of its members did not visibly vote for the legislation and had to be asked to stand up to register their presence. Several PPP members have often complained of their party’s capitulation to the MQM, and on Monday they looked more defeated than those chanting on the floor.

They’ve been doing the rounds of television channels for the past few weeks about the law, and surprisingly their beef isn’t really with the legislation or the party that has been pushing for it the most: the MQM. In fact, most parties appeared entirely civil with the MQM, and continue to have fairly cordial relationships with them. Perhaps everyone realises that while the PPP may have its day in the opposition, the MQM inevitably remains part of the Sindh government, regardless of who’s on top. Sindh Assembly Speaker Nisar Khuhro spoke to reporters after the session, waving his embossed Versace sunglasses case around, to point out how the National Peoples Party and the Pakistan Muslim League-Functional (PML-F) had supported the Musharraf-era local government system. “But so did the MQM,” pointed out a reporter. “Ah yes…” came the reply from a nonplussed Khuhro.

So instead of bashing the party that has backed the local government system, the parties have picked on the PPP, dubbed it a traitor and opted to use this as a convenient ‘Get Out of the Coalition Free’ card in the Monopoly game that is Sindh’s politics. [Buy up some property, control the masses, and manage the kitty].

In fact, one hears that the PML-F is “okay” with the legislation – it did support the 2001 system introduced by Pervez Musharraf after all – but now “wants to contest the elections against the PPP, not as a part of the government”.

And it has a comfortable way of exiting now. The legislation, which has been described as “against Sindh’s interests”, gives the PML-F a way to not just leave the Sindh and federal governments and criticise the PPP’s performance, but also rake up opinion in the province against the PPP and make the local government system a rallying cry for the next elections.

And while President Asif Ali Zardari has been trying to keep everyone happy – an allowance here, some cajoling there – the PML-F looks set to make an exit. The only group that may be persuaded to stay in the government is the Pakistan Muslim League-Q, led by Shaharyar Mahar, and one hears negotiations are already underway. Whether the PML-F members will be sprinkling confetti when they hear of that is a matter for another riotous session.

Workshop for working women: ‘Capital to be made model city’