Both teams were locked at 139 after 40 overs, sendin­g the match to the tense Super Over decide­r.
By AFP
Published: October 1, 2012
Tweet Email 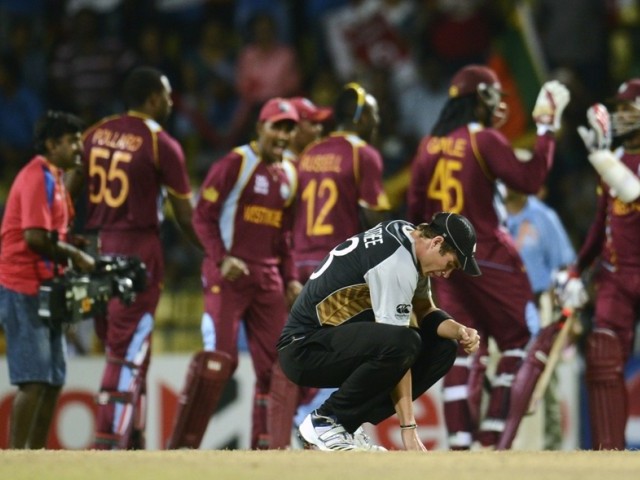 PALLEKELE: West Indies knocked New Zealand out of the World Twenty20 in a dramatic Super Over Monday after their group one match finished in a tie.

Both teams were locked at 139 after 40 overs at Pallekele stadium, sending the match to the tense Super Over decider. New Zealand scored a challenging 17 off their six balls with Ross Taylor hitting a six off Marlon Samuels.

But West Indies reached the target with a ball to spare as Samuels smashed the winning six off Tim Southee to keep his team in contention for a semi-final place.

West Indies, who have two wins in three matches, now wait for the result of Sri Lanka’s game against England later Monday, which will decide which two teams from the group progress to the semi-finals.

“Samuels is my go-to man in pressure situations, he’s suffering from a bad shoulder so that’s why he doesn’t bowl more,” said West Indies captain Darren Sammy of the all-rounder. “It was a great fight-back and I am very happy at that.”

A disappointed Taylor rued New Zealand’s missed opportunity – but admitted that the West Indies’ Super Over was “pretty awesome”.

“We probably should have won it in normal time. Credit to West Indies, to score 18 of five balls is pretty awesome. When the first ball is a no-ball that goes for six it ruins the over,” said Taylor.

The breathless finish came after Southee (3-21) and Doug Bracewell (3-31) restricted the West Indian innings to 139 in 19.3 overs, before Taylor’s unbeaten 62 kept New Zealand in with a chance for an upset win.

With New Zealand needing 14 off the last over, Taylor hit a six off the fourth delivery bowled by Samuels but managed just a single on the penultimate ball to leave his team two short of victory.

Doug Bracewell hit the final delivery but was run out while taking a second run, as the West Indian players celebrated jubilantly.

Sunil Narine took 3-20 off his four overs to keep New Zealand in check. Taylor hit three sixes and as many fours off 40 balls.

Chris Gayle top-scored with a fluent 30 while Kieron Pollard (28) and Samuels (24) also chipped in with useful contributions, but none of the batsmen could capitalise on their good starts.

Bracewell provided New Zealand with a double breakthrough by dismissing Johnson Charles (eight) and Andre Russell (six) in his first two overs, leaving the West Indies in a difficult situation.

Southee, who came as first change, removed Gayle in the seventh over to deepen the West Indies’ plight. Gayle hit three boundaries and two sixes off just 14 deliveries.

Off-spinner Nathan McCullum finished with 2-19, dismissing Samuels and Darren Bravo (16) as the West Indies lost three wickets in the space of just 15 runs.