Politicking: Amid his own people, Sharjeel takes Nawaz to a trip back in time

Politicking: Amid his own people, Sharjeel takes Nawaz to a trip back in time 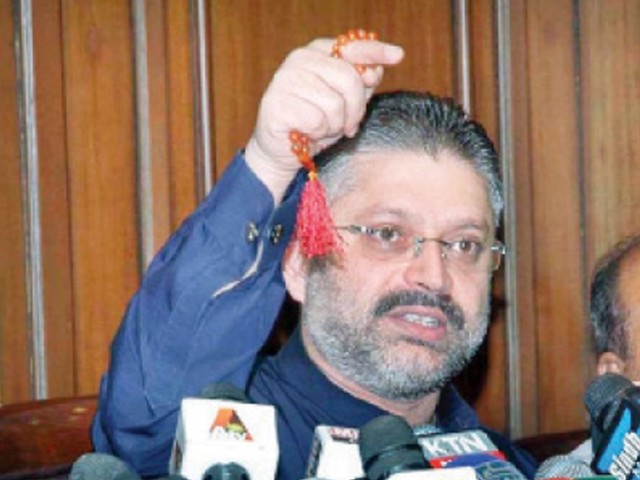 Memon says people of Sindh have already rejected Nawaz Sharif and his party could not win a single seat from the province.PHOTO: APP

KARACHI: The Sharif brothers during their tenure were the biggest obstacles to the progress of Sindh and now they cannot bear the development of the province, said Sindh Information Minister Sharjeel Inam Memon on Friday.

Speaking at an open kutchery held in Nagarparkar, he said that the people of Sindh have already rejected Nawaz Sharif and his party could not win a single seat from the province. “Nawaz Sharif rolled back the Thar coal project and now he is talking about the rights of Sindh,” the minister said. The Sharif brothers were in favour of the Kalabagh dam, then how can they change the destiny of Sindh when they are not sincere to the people of Sindh, he questioned. “If they are really honest, then why have they taken stay orders against their cases?”

On Awami Tehreek chief Ayaz Latif Palijo’s announcement of contesting next election from Nagarparkar, Memon said the nationalist leader had stood the last elections in Sanghar and secured only 500 votes. “How could he face me in the upcoming elections,” the minister boasted.

Relating to the nationalists recent protests, he said that the opposition was spellbound by the popularity of the PPP and was spreading misinformation against the government. “[But] they cannot misguide the masses through their processions and sits-in,” he added.

The Pakistan Peoples Party-led government has provided 100,000 jobs to youngsters in Sindh and has done record development works, as we believe in serving the masses, Memon said.

A large number of people from different areas met the minister at the gathering and lodged a number of complaints against revenue, education, police and local bodies departments.

The information minister directed the officers concerned to resolve the issues within one week. Memon also called for the establishment of a trauma centre in Nagarparkar.