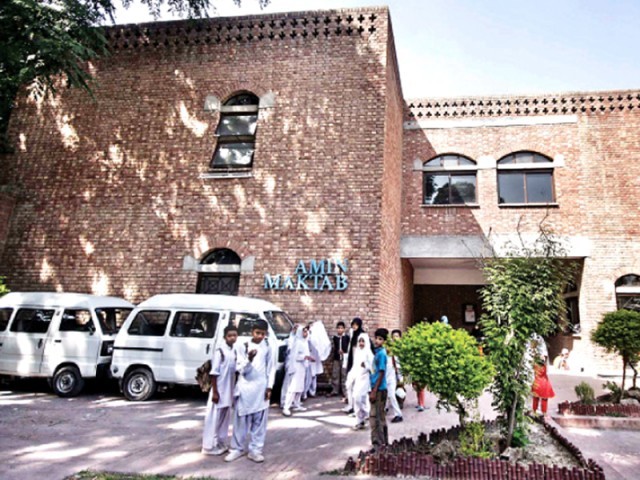 Established in 1961 by the Pakistan Society for the Welfare of Mentally Retarded Children, Amin Maktab celebrated its golden jubilee this year. PHOTO: SHAFIQ MALIK

“We fail, as a society, to respect the word ‘disability’. We focus more on what one cannot do rather than on what one can do,” Khawar Sultana, a clinical psychologist at Amin Maktab, said on Tuesday.

Amin Maktab is the oldest institution in Lahore for intellectually challenged children.

Established in 1961 by the Pakistan Society for the Welfare of Mentally Retarded Children (PSWMRC), Amin Maktab celebrated its golden jubilee this year. As many as 85 children are enrolled at the Amin Maktab located near Firdous Market. They are taught in nine groups based on their abilities. The institute also runs an Inclusive Education Programme and an Outreach Programme for children with special needs.

Sultana, who has been working at Amin Maktab for 18 years, currently heads the Inclusive Education Programme (IEP). The programme helps place children with mild to moderate problems in mainstream schools. Started as a pilot project in 2002, the IEP formally took off in 2005 with as many as 30 schools in Lahore involved, Sultana said. “We offer training to their academic staff…once a school is ready to cater to the needs of special children they are incorporated into the program,” she said. Currently there are more than 300 children in the programme.

The children are initially placed in a resource room where a teacher helps them achieve the level of learning of the class they are to be inducted in. On the side, students in the class are educated about how to facilitate an intellectually challenged child.

“We often tell a story through two puppets, Motoo and Mina,” Sultana said. Motoo is an ordinary inquisitive child who asks questions about the needs of children with disabilities. Mina provides the answers,” she said. The IEP focuses on enabling the children to communicate and to deal with money. “We want to focus on providing the child with practical learning skills in line with their capabilities,” she said.

Nuzhat Rubab, a psychologist at Amin Maktab, believes a lack of social acceptance inflicts greater pain on children with disabilities.

“In a society where people regret the birth of a girl, imagine the reaction to the birth of a child with different needs,” she said. Rubab said it was essential to be considerate while speaking of intellectually challenged children. “They do not lack abilities but have different needs,” she said. She said she disapproved the use of the words ‘retarded’ and ‘disabled’ for such children. She said she regretted that the PSWMRC under which Amin Maktab is registered has the word ‘retarded’ in its name. “There was a general lack of awareness when the society was formed 50 years ago,” she said.

Started in 1988 in collaboration with the UNICEF, the Outreach Program (ORP) has educated more than 3, 000 children. Currently 418 children are benefitting from it. The programme helps families of children in the ‘severe’ to ‘profound’ impairment categories.

Farzana Razi, the ORP supervisor, said the programme aims at early detection and intervention. The earliest intervention was for a 14 day-old. Under the ORP, five teams each including a psychologist and a community worker visit a child at least once a month.

“There is no age limit in the ORP. Our oldest registered student is aged 65,” she said. Parents of children in the ORP are also offered counselling and support, she said. Without a social support structure, parents often go through feelings of guilt and denial, she said. “We try to educate them to accept the child and take responsibility for it.”

Razi said there was an urgent need for the government to step up facilities for children with intellectual impairments.