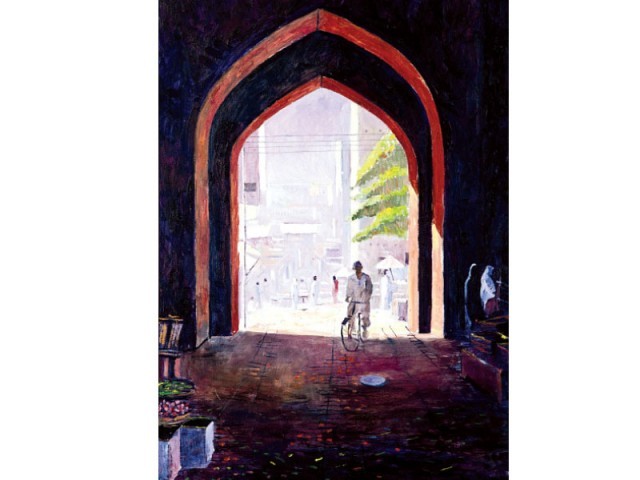 Working mostly on large canvases, the artist tends to work with landscapes and cityscapes while staying true to his Lahori roots. PHOTO COURTESY: GALLERY 6

Renowned artist Ghulam Mustafa brings the magic of Lahore to the capital by showcasing his hometown in his paintings.

Titled “Kaleidoscope of Sunlight”, it showcases Mustafa’s forte of capturing light and shadows, better known as the “En plein air” style of outdoor painting. This style is mainly used by artists who paint with immense details — the play on sunlight creates shades and shadows using the falling rays.

Working mostly on large canvases, the artist tends to work with landscapes and cityscapes while staying true to his Lahori roots. His paintbrush accurately captures the kaleidoscopic effects created by the sunlight, whether he is walking in the interior of the walled city of Lahore, passing through the narrow lanes, admiring the blossoming trees, or moving in the countryside, enjoying clear skies and travelling to the mountains. He is a prominent artist of the School of Punjab Landscape, started by his teacher Khalid Iqbal.

Born and raised in the walled city of Lahore, many of his paintings reflect the architectural heritage of that particular area. There are cityscapes as seen through the city gates, in Kashmiri Bazaar or from balconies of the area. One can see people moving in the lanes, cooks at roadside restaurants making puris, and others flying kites — the symbols of life in the rich cultural city of Lahore that he witnessed growing up.

However the exhibition not only depicts Lahore but other greener scenes as well. Mustafa paints the lush green hills of Muree, children playing in green parks, and scenes of rural life that exude feelings of calm over an urban viewer.

Dr Arjumand Faisel, the curator of Gallery 6, said, “Ghulam Mustafa’s absorbing paintings of streets and alleys filled with different characters and characteristics remind me of the stories and characters of [Nobel Prize-winning Egyptian writer] Naguib Mehfuz. This is the reason that we have invited Egyptian Ambassador Said Hindam to inaugurate the show.”

Ghulam Mustafa received the National Prize in the landscape painting genre at the 7th National Visual Arts Exhibition in 1996. In 2002, he was honoured with a President’s Pride of Performance Award. Besides this, he has received numerous honours in various exhibitions, both in Pakistan and abroad.

He has held more than 50 solo and group shows in the last 24 years. He is also the founder of the Artists’ Association of Punjab, where he served as the general secretary. Besides this, he has worked in different capacities in different organisations, including Executive Director of the Punjab Arts Council.

The display will remain open till October 8.

Financing learning: ‘For education system, government is an unconcerned parent’