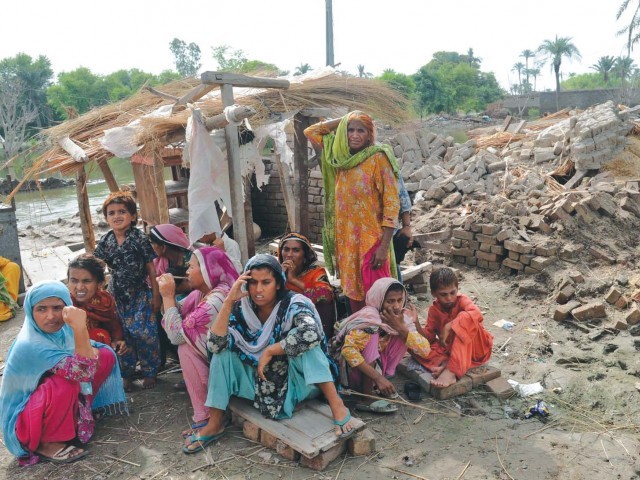 ISLAMABAD: Ministry of Women Development (MWD) is seeking the Prime Minister’s approval for reallocation of $210,000 provided by United Nations Fund for Population (UNFPA) towards helping women of flood-hit areas.

Sources told The Express Tribune on Saturday that the funds would be spent on providing safe delivery kits, hygiene and dignity kits, psycho-social support and related assistance to flood affected women and children, especially pregnant women.

They said that the decision to re-allocate the fund was made in a recent meeting held between UNFPA officials and MWD. It was learnt during the meeting that a large number of women in the flood-hit areas were pregnant and highly vulnerable. These women are in need of medical aid, nutrition and lodging.

An official said that the re-allocated amount of US $90,000 was earmarked for the annual work plan and an additional $120,000 was provided by donors in May 2010 for strengthening Women Crises Centres.

In order to provide relief to women who have suffered in the recent floods, it was agreed between the MWD and UNFPA to re-allocate funds for addressing the plight of such women and children.

Sources said that 26 Benazir Bhutto Centres for Women located all over Pakistan had already been declared as relief camps in the flood affected areas. They said these centres were engaged in providing necessary assistance to women and children in collaboration with the district administration.

The Ministry of Women Development has also written letters to NDMA and Secretary Health to understand the steps  being taken for the rehabilitation of women and children.

The secretary health has been questioned in the letter to elaborate measures being taken for pregnant women in flood-hit areas and collect dates of expected pregnancies and missing children during the floods.

Sources further said that Yasmin Rehman, advisor to the Prime Minister on Women Development, has taken a serious note of missing children and girls in various areas including Jaffarabad, Multan and Mansehra. She instructed all the NGOs to provide data on women trafficking.