Even in calamities, religious differences prevail

Even in calamities, religious differences prevail 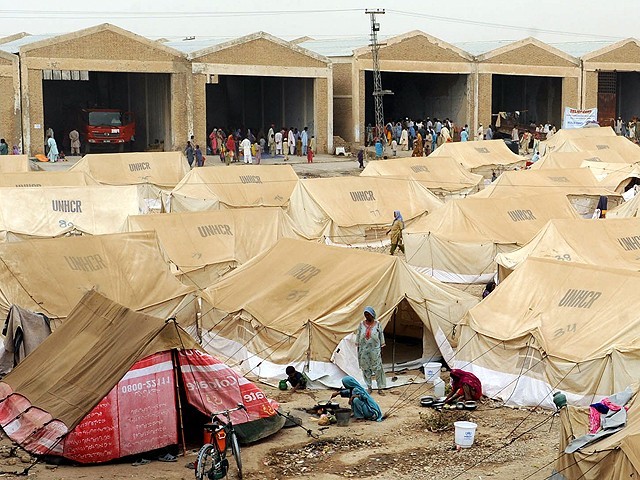 Survivors are seen at a makeshift camp in Quetta. PHOTO: AFP

QUETTA: Religious differences remain significant even in times of utmost crisis, as Hindu and Muslim flood victims chose to live separately after moving to relief camps in Quetta.

Around 1,500 flood survivors from the Hindu community are taking shelter in the Arya Samaj and Krishna temples near the city centre, while another camp is set up at a Sikh temple in Quetta Cantonment.

“We have been living separately because our established traditions, culture and norms are different from Muslims. Also, we are few in number so we have adjusted into separate relief camps,” said Kaliam Das, president of the Hindu General Panchayat in Quetta. The Hindus say they demand nothing from anyone, including the government. “We also realise that a large number of our Muslim brothers have been rendered homeless and they should be given sufficient relief. Hindus do not want to add to the burden,” Das added.

A sense of fear prevails in the camp, where sanitation is one of the major problems for the victims in Krishna Mandir but they are immediately hushed up by others. “There are two toilets for 500 people, including women and children,” said Muki Lal Chand, a flood victim. “The government has provided nothing even though we had only asked for more toilets,” he said.

The trauma has also led to death. Muskash says his wife could not handle the stress from the disaster and died. “My wife Sapna Devi, 30, died two days ago and I took her to Civil Hospital Quetta for treatment where I spent Rs100, 000 on medicines,” Muskash told The Express Tribune. According to him, there were no medicines or doctors in relief camps.

Displaced since the last 13 days, the survivors are more concerned about the property they have left behind in Dera Allahyar and Usta Mohammad, rather than receiving relief goods. “Ninety per cent businessmen in Jaffarabad are Hindus,” Das said.

Since a few robberies were reported in Dera Allahyar, Das said that 100 armed people had been left behind to protect their valuables. “The government has not provided us any security. We demanded that the Frontier Corps be deployed to protect our valuables. It is the duty of the state to protect life, property and honour of its citizens from criminals and gangsters,” another flood victim said.

The Hindu community in Quetta, majority of whom are traders, are contributing in providing goods, clean drinking water and other necessities, Das said.

They said  the Minorities Minister Jay Parkash had helped the Hindus and was providing two sqaure meals to families. However, the victims complain that breakfast is never provided and they are served rice and daal for both lunch and dinner.

However, the president of the Hindu Panchayat refuted the complaints and said they are being provided all facilities, except for toilets. Following the outbreak of illnesses, Hindu doctors have begun treating patients free of charge. Four pregnant women are expected to give birth in the coming days, he added.

The survivors ask for nothing but their homes. “I just want to return,” says Prem Chand adding that, “We are worried what to do when we go back because our houses are completely destroyed. The floods have really devastated our lives,” he said.

Some have taken advantage of the situation and transporters have charged a heavy sum of money as fare from Jaffarabad to Quetta. “I paid 10,000 for six people. Now I don’t have a single penny in my pocket,” Chand said.

The day Edhi broke down