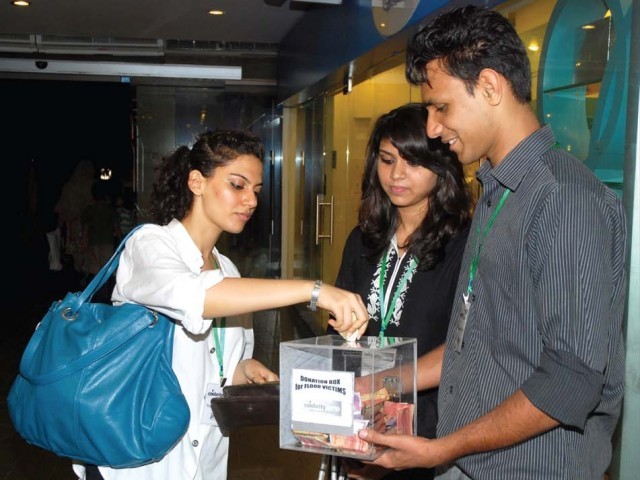 LAHORE: Celebrity Camp at the Mall of Lahore collected Rs300,000 in some three hours for flood victims from the people who came to shop at the mall on Saturday night.

There was no entrance fee for the event and volunteers carried boxes to collect the donations. The organisers stood out dressed in white T-shirts urging people to donate for the flood victims.

The two-day camp was organised by a group of people from the fashion and entertainment world, who showed up at the event to ask shoppers to donate to the flood victims. Music bands including Lal, Roxen, Noori, Falak and singers Ali Sher, Noman Javed and Umer Nabeel performed on the occasion. Singer Ali Azmat and Fareeha Pervaiz also showed up at the event and asked people to donate money.

In addition to collecting funds, some celebrities also put on their belongings up for auction. A cricket ball belonging to Shoaib Akhtar was auctioned for Rs50,000, the highest bid among all things that went under the hammer. A shirt by the bowler was sold for Rs10,000. Outfits by Maria B went for around Rs40,000.

Designers Munib Nawaz, Khadija of Elan, Amna Haq, Ammar Belal and a few others also put their outfits on sale and donated the money for the flood victims.

Maria B, one of the main people behind the idea of the Celebrity Camp, told The Express Tribune that the idea to mobilise people to donate generously for the flood victims in such a way was ‘a novel concept’.

“This is a more of an awareness campaign rather than a fundraiser. We have been raising funds through different events, but this is a free event. The loss that we have sustained as a result of the floods is huge. We have to donate continuously till the people affected in the floods are rehabilitated. We will move to other cities and go to schools as well to raise funds for the flood victims,” she said.

Shoaib Akhter said that it was a difficult time for the country and added that people should donate generously. “I think this is a great idea to create awareness among the people to donate as much as they can. We should not just donate once and think we have played our role. We need to keep ourselves mobilised to deal with this natural calamity,” he added.

Singer Ali Sher who also performed at the event said that he had come to show his solidarity with the flood victims. “We should stand united and help our brothers and sisters who have lost their livelihoods in these floods,” he said.

“It is good to see a lot of celebrities here raising funds for the flood victims. We should all empathise with the pain of those who have suffered in the floods,” said Saira Ahmed, one of the shoppers.

Bilal Mukhtar of Bilal PR and Event Management said that the event was a success as a lot of people had shown up. “A good thing about this event is that it shows that we all stand together. Even though there wasn’t any ticket, considerable money has been raised from the shoppers,” he said.

Sarfaraz Niazi, of JBnJaws said that the camp aimed at raising awareness among the people to donate for the flood victims.

“We didn’t make it look like some concert because of Ramazan. We are already receiving calls from other cities who want us to go there and arrange similar fundraising events.

Another benefit of this camp has been that we have formed a panel of celebrities who are willing to do a lot to raise funds for the flood victims. We are planning to visit other cities after Eid,” he said. The funds collected from this celebrity camp will be donated to the army’s relief camp, he added.

No teeming crowds at Sunday Bazaars