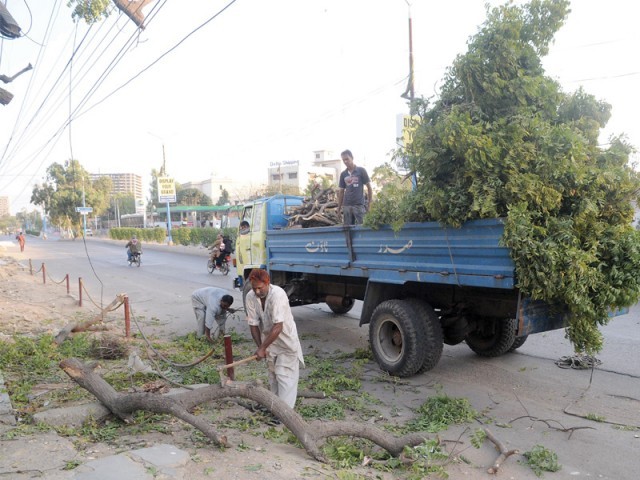 This photo, dated January 17, 2012, shows workers of the city district government cutting trees at Dr Ziauddin Road. Thousands of trees lining the city’s streets have been replaced with Conocarpus saplings, which environmentalists say will disrupt the ecological balance of Karachi. PHOTO: FILE

KARACHI: It seems as if Karachi’s administration has failed to do its homework yet again. In an attempt to lend some shades of green to the monotonously grey concrete jungle, it decided to plant thousands of Conocarpus trees around the city.

The problem: the person who picked the tree seems to have been so bowled over by its appearance that he or she overlooked the fact that the species would disrupt the city’s ecological balance.

In the process of planting the trees, indigenous species have been ripped from several roads, including Shahrae Faisal.

Karachi’s administrator, Muhammad Hussain Syed, said that thousands of trees were planted, denying the city government was tearing down indigenous species. “We need space for development work and have been relocating old trees,” he told The Express Tribune. Around 150 trees had been uprooted from Shahrae Quaideen and planted at Hill Park.  But environmentalists do not agree with the government’s plan and see massive loopholes in it. They warned that urban forests in the city will cause multiple problems for the people and government. “Planting only one tree across the city is dangerous,” warned Shehzad Sadiq, the plantation officer for Sindh Coastal Community Development Project of the International Union for Conservation of Nature (IUCN). “We need to plant more indigenous species but the city government seems fixated on planting Ethiopian saplings.”

Sadiq said that Conocarpus need quite a lot of water. “Another problem is that [the plant’s] pollen will increase allergy among residents.”

Another IUCN official, Nadeem Mirbahar, told The Express Tribune that, “The city is in the red zone. Conocarpus blocks the growth of other plants and is not friendly for the city’s birds.”

Muhammad Moazzam Khan, the fisheries consultant for World Wide Fund for Nature (WWF)-Pakistan said, “We might not even see a single crow in the city after Conocarpus is planted.” He added that more studies are required on how the plant will adapt to Karachi’s environment. It is already notorious for causing droughts in several regions. “This city will be just like Islamabad, where the pollen has become a major issue for its residents.”

But the present government seems unfazed by these concerns and is quite comfortable with its plan. “There are trees on the roads and it looks great. We are following our manifesto. We are environment-friendly people and are concerned with global climate change,” said Taj Haider, the general secretary of the Pakistan Peoples’ Party’s, Sindh chapter.

Rab Nawaz, WWF’s director for Sindh, said that the deforestation and forestation were occurring side by side in the city. “The government is planting trees in the city and cutting mangroves as well. It is a big city and proper planning is needed,” he said. “The long-term effects of planting such a vast quantity of these trees will harm the city’s residents.”