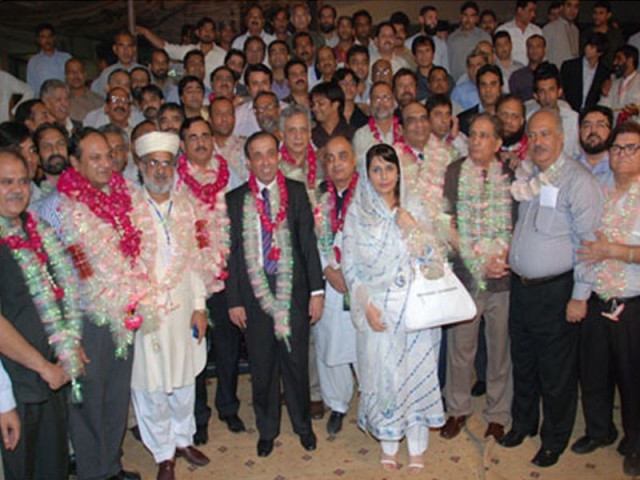 Newly elected president of the Lahore Chamber of Commerce and Industry (LCCI) Farooq Iftikhar has called on the government and private sector to tighten their belt to ease the intensity of economic slowdown.

Iftikhar was talking to the media about his priorities and challenges here on Saturday, after being informally elected president of the LCCI. Irfan Iqbal Sheikh has been elected senior vice president and Mian Abuzar Shad has become vice president.

According to the LCCI’s election schedule, September 22 was the last date for filing nomination papers for office-bearers for the year 2012-13 and no other candidate submitted papers to contest for the posts of president, senior vice-president and vice president.

A formal announcement of results will be made at the annual general meeting scheduled for September 29.

Spelling out his priorities and challenges, Iftikhar expressed fears that if expenditures were not controlled, the outcome would be nothing else but more poverty and joblessness.

He said tight monetary policy was not the only solution to the high inflation as it could be tackled easily by increasing production and cutting unnecessary expenditures.

He suggested to the business community that if they wanted to give a boost to their exports, they should now focus and spend energies on promoting non-traditional products.

Iftikhar pointed out that high mark-up on loans was crushing the industrial sector, which needed to be looked into by the authorities. The Federal Board of Revenue (FBR) should also focus on simplification of taxes as existing procedures were cumbersome in comparison with other economies, he suggested.

He said the main objective of the LCCI was promotion of trade and industry and all resources would be utilised for economic turnaround as economic meltdown had started taking its toll and everybody was suffering.

Underlining the importance of research and development which could do miracles, Iftikhar said the LCCI, in collaboration with the business community, would work for the promotion of research in the country.