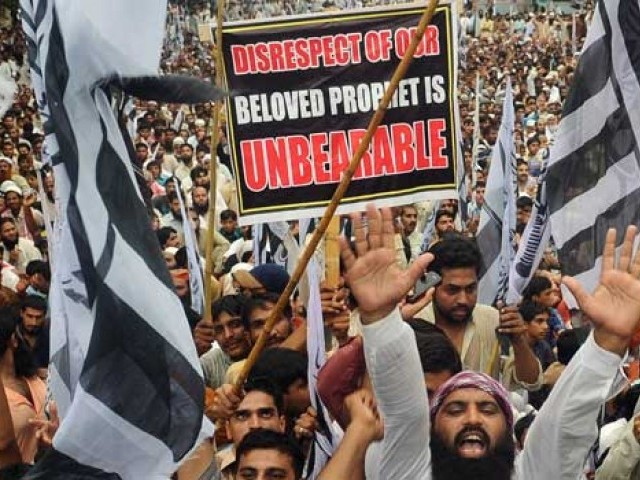 Railway minister says he is ready to be a criminal for instigating people for murder. PHOTO: AFP/ FILE

PESHAWAR / LAHORE: Federal Railway Minister Ghulam Ahmed Bilour announced that $100,000 will be awarded to the person who kills the maker of the anti-Islam blasphemous film “Innocence of Muslims”.

Speaking to the media on Saturday, Bilour said that there was no other way to lodge a protest and instill fear among the blasphemers other than murder of the filmmaker. “I request all the rich people to bring out all their money so that the killer can be loaded with dollars and gold.”

The minister admitted of knowing that he was committing a crime by instigating people for murder, but said that he was ready to be a criminal for this cause. “If there is a case lodged against me in the international court or in this country’s court, I will ask people to hand me over to them… I want to show these countries that we will not tolerate any such things.”

He added that if he is punished, the country should not end ties with the US as this was a matter between him and his prophet.

He also commented on the burning down of a church in Mardan by protesters on the Ishq-e-Rasool Day and expressed grief over the incident. “The minorities over here, the Christians and the Hindus, they are all our brothers. They are also Pakistani.”

The Markazi Anjuman Tajran (MAT) Sheikhupura announced a reward of Rs5million for the person who kills the maker of the anti-Islam film, The Express Tribune has learnt.

MAT Sheikhupura President Muhammad Pervez told The Express Tribune that the association has unanimously taken this decision and the announcement is not his individual act.

Pervez said that the members of the association are ready to sacrifice their parents, children and properties for Prophet Muhammad (pbuh) and will never tolerate the act of the filmmaker of blasphemous movie.