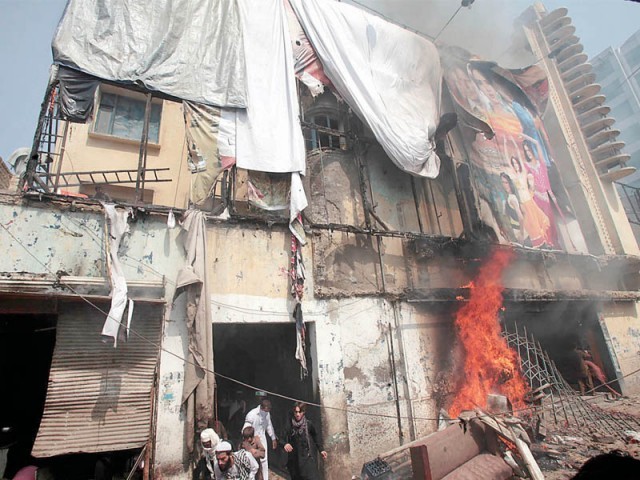 The provincial capital resembled a battlefield on Friday as the city experienced its worst riots in recent years, claiming at least six lives and injuring 65 others.

There was anarchy in the city as tens of thousands of people took to the streets on Ishq-e-Rasool (pbuh) day, a national holiday declared to commemorate and express love for Prophet Muhammad (pbuh), and in protest of a film against Islam by a US filmmaker.

Protesters torched, pelted stones, ransacked shops and chanted slogans against the United States.  Demonstrations were held across the city, from Hashtangri Chowk to Firdous Chowk on the Grand Trunk Road.

The influx of protesters from nearby areas, including Nowshera and villages on the outskirts, reinforced demonstrators who clashed with the police throughout the day.

Skirmishes started in the morning, when smaller bands of demonstrators marched towards Peshawar Cantonment from the outskirts of the city. Protests intensified following Friday prayers.

Mobs set ablaze four cinema halls – Firdous, Shama, Capital and Naz, while rioters clashed with the police and broke into several shops in Saddar, Hashtnagri and other commercial localities of Peshawar city.

The Khyber-Pakhtunkhwa Chamber of Commerce and Industry was attacked by a large crowd, who not only ignited the building, but also set fire to six vehicles in the parking area.

The protesters were armed and fired at police officials when officers tried to disperse them. A driver of ARY news was killed during one such incident. However, the angry crowd could not pass through the barricaded Assembly square, which was closed down by containers.

The atmosphere in the city remained like a war-zone throughout the day where gunshots and bullets were heard and teargas was thrown. The police only seemed to protect the red zone area, where the US consulate is located.

A Jamaat-e-Islami (JI) protest was attended by thousands of people, including worshippers from the Mohabbat Khan Mosque, who joined in following Friday prayers. The rally’s route was changed from Ashraf road to Ramupra Bazaar due to clashes on Firdous Chowk.

JI leaders made speeches at Hashtangri Chowk and were joined by protesters from the Jamiat Ulema Pakistan.

The Jamiat Ulema-e-Islam-Fazl (JUI-F) had planned to rally near the K-P Assembly and were scheduled to head towards the US consulate via Khyber Road at 3:00pm, but police had placed containers to stop protesters from entering the red zone.

In Mardan, a furious mob set fire to the Sarhadi Lutheran Church, breaking all furniture inside and destroying a nursery school on the premises of the church, along with residential quarters in the area.

In Hangu Bazar violent protesters broke into the National Bank of Pakistan, Al Falah Bank and the District Headquarters Hospital. They broke furniture inside the hospital and destroyed the main gate of the banks. One person was injured in the clashes.

The lawlessness led to the provincial government ordering that a judicial inquiry be conducted.

Later in the day, JUI-F Chief Maulana Fazlur Rehman condemned the violence and claimed that “outsiders” had tried to “defame the peaceful protesters through a planned scheme.”

Peaceful demonstrations: Thousands take to the streets in Wana