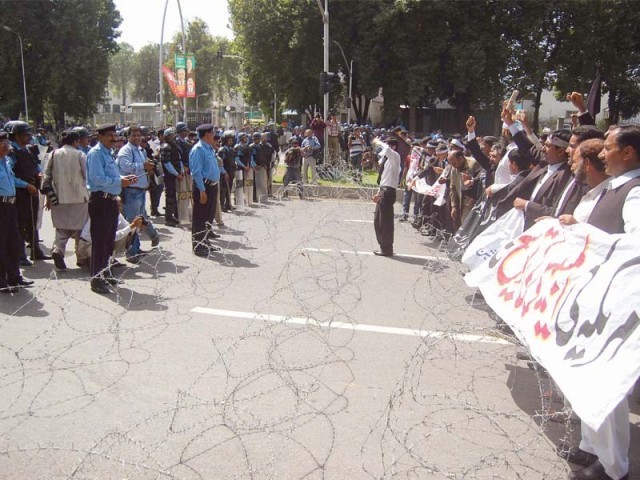 Protesters and police gather outside the diplomatic enclave during a protest organized by the Islamabad Bar Association. PHOTO: MUHAMMAD JAVAID/EXPRESS

The legal fraternity joined the chorus of condemnation against an anti-Islam film on Wednesday when over 300 lawyers managed to break through a gate to Islamabad’s heavily-guarded diplomatic enclave in a fresh protest to denounce the sacrilegious movie.

More than 200 riot police armed with batons and shields stood guard as the lawyers broke through the first of two gates leading to the enclave. However, the lawyers were kept at bay by the police to further penetrate the enclave, which contains most Western embassies in Islamabad.

“I don’t understand why the police is stopping us. It’s a peaceful rally and we have to record our protest before the US embassy,’’ said Shah.

The lawyers halted at the second gate, where they delivered fiery speeches against the US, urging the government to break its “criminal silence” over the “Innocence of Muslims” film.

Speaking at the rally, IHCBA President Syed Nayab Hassan termed the anti-Islam film a conspiracy, and urged the government to expel the American ambassador in Pakistan, warning that protests would continue countrywide if the ambassador was not forced out the country immediately.

“The government should stop the policy of appeasing the US,” said a protester, castigating the country’s rulers for not officially registering their protest with the US.

Lawyers also staged a rally organised by the Balochistan High Court Bar Association (BHCBA). The rally culminated outside the Quetta Press Club, where lawyers denounced the movie and urged the government to break off ties with the US.

“The US is directly involved in this shameful act. Pakistan and other Muslim countries should severe all diplomatic ties with the [US],” said Advocate Syed Nazeer Agha while addressing the protesters.

Meanwhile, the Anjuman-e-Tajiran Balochistan announced a shutter-down strike in Balochistan on Friday against the blasphemous movie.

In Peshawar, minorities also condemned the content of the American movie. The Diocese of Peshawar, Church of Pakistan, organised a special conference on Wednesday in which Bishop Humphrey S Peters expressed the Christian community’s solidarity with the Muslim world, adding that Christians would protest against the controversial movie side by side with Muslims.

Meanwhile, thousands of protesters in the Ghallanai headquarters of Mohmand Agency passed a resolution to wage jihad against Nato forces in Afghanistan. In Upper Dir, Jamiat Ulema-e-Islam-F (JUI-F) activists and traders observed a shutter-down strike and appealed to the Organization of Islamic Cooperation to enact laws to protect the dignity and honour of Prophet (pbuh).  A shutter-down strike was also observed in D I Khan, where JUI-F chief Fazlur Rehman held a protest rally urging the government to record a strong protest against the anti-Islam movie.

A shutter-down strike was also observed in Sukkur on a strike called by the Pakistan Sunni Tehreek (PST) and supported by All Sukkur Small Traders and other trade unions in the city.  The rally converged at Clock Tower roundabout, where traders condemned the movie and urged the government to strongly protest the American movie.

Around 1,000 students from the Jamaat-e-Islami took to the streets in Lahore, chanting anti-US slogans and burning the American flag.

Precautions were taken by law enforcement agencies to ensure foolproof security at the US consulate. The Express Tribune learnt that intelligence reports pointed towards the possibility of a terrorist attack on the consulate during ongoing protests. (With additional input from our correspondents in Peshawar, Lahore, Quetta and Sukkur)