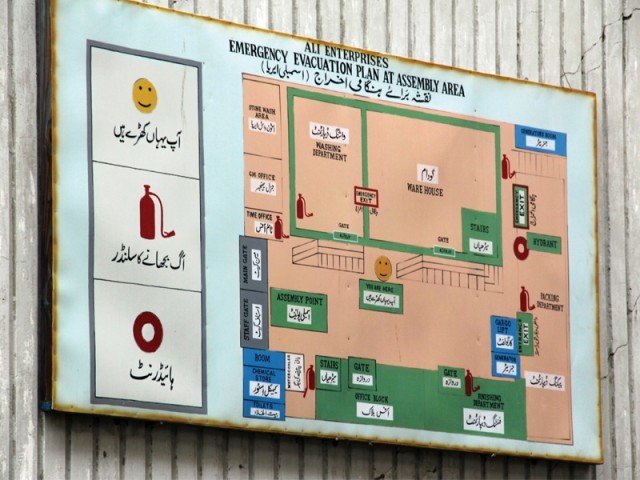 An emergency evacuation plan hangs undamaged next to the entrance of the warehouse, which was one area of the compound badly affected by the fire.. PHOTO: AYESHA MIR/EXPRESS/FILE

KARACHI: As investigations of the Baldia garment factory continue, on Tuesday it emerged that it wasn’t the chief minister but the governor who ordered the suspension of inspections in industrial areas in 1999.

The decision was taken after complaints of widespread corruption were made against visiting electric and boiler inspectors, deposed the energy officials before the tribunal probing the blaze, which claimed the lives of 258 factory workers.

“Then Sindh governor ordered to shut the offices of the electric department and boiler inspection but the law department opposed it and suggested changing the inspection procedure,” senior electric inspector, Amjad Mahesar, told the tribunal, which continued its proceedings for the second consecutive day at the Sindh Secretariat. “Later, the caretaker cabinet came up with the decision to suspend the inspections that no successive government altered.” The two-member commission, headed by Justice (retd) Zahid Qurban Alvi, was formed by the Sindh government on September 12, a day after the fire broke out at Ali Enterprises. The tribunal had started its hearing on Monday, summoning the labour officials before it recorded the statements of fire and electric officials.

On the day when they were asked to submit their report of the fire, senior electric inspectors seemed confused during the hearing and could not even define the rules of their department, commonly known as the electric and power department.

“We want to know what do you do at the time of inspection and when did you last visit any factory,” Justice Alvi asked them.

“We inspect the load of electricity at the factories, but formally stopped doing it in 2003,” replied Amjad Mahesar.

The annual inspection has been suspended, but the factory buildings are checked at the time of their construction, replied Saeed Ahmed Sethar, a senior consultant at the energy department.

When the tribunal asked whether the power officials had visited the gutted factory to check its generators, transformers or other equipment, they answered that they went to the factory on the next day of the fire, but could not go inside the building.

At 6:37 pm on September 11, a man named Shahid had informed the fire brigade department about the blaze, the chief fire officer, Ehtisham Saleem, told the judicial commission on Tuesday.

Nine to 10 fire tenders were sent to the spot but by the time they arrived at the factory, it had turned into a third-category fire. “We still entered the building and started extinguishing the fire,” he said.

“Can you speculate on the cause of the fire given your experience?” Justice Alvi interjected, saying that the tribunal’s main purpose was to investigate the cause of fire and who was responsible for it.

“An electrical short circuit is a possibility,” responded Saleem. “We have not visited the factory. It has now become dangerous and the police are not allowing anyone to enter the building.”

Setting aside the report claiming there was no fire safety system at the factory, the tribunal chief said he had seen fire extinguishers inside the building when he visited the site.

“[But] I don’t have any idea whether the fire alarm or other civil defence systems were working,” Alvi speculated. “The one thing that worried me was the lack of exit points. Most of the people seem to have lost their lives because of suffocation and the stampede.”

The fire gutted the basement, the first and the third floors, but the second floor was not destroyed, he observed, asking the fire officers if they could come up with any possible reasons. “The second floor was packed with machines,” Alvi added. “There was no place to move.”

“Sodium nitrate and other chemicals used in the garment industry are highly flammable and work as catalysts,” Saleem replied.

The tribunal will continue its hearing today (Wednesday).