"I'm not going to put labels on this until we have a comple­te invest­igatio­n," spokes­woman Victor­ia Nuland.
By AFP
Published: September 18, 2012
Tweet Email 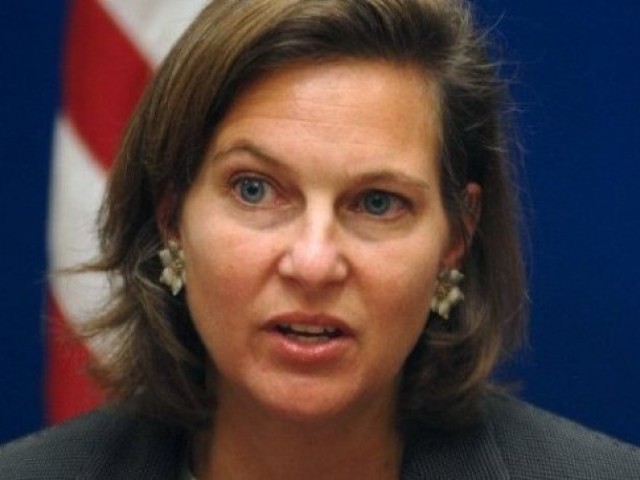 "I'm not going to put labels on this until we have a complete investigation." PHOTO: AFP/FILE

WASHINGTON: A State Department official refused Monday to call an attack on a US mission in Libya in which four Americans were killed “an act of terror,” saying a full investigation had to be completed first.

US and Libyan officials have offered widely differing accounts about Tuesday’s assault on the Benghazi mission, on the anniversary of the September 11, 2001 attacks, in which ambassador Chris Stevens and three other US staff died.

The US ambassador to the United Nations, Susan Rice, confirming earlier accounts of the attack from the State Department, said Sunday it began with a spontaneous protest over an anti-Islamic video.

But Libya’s parliament chief, Mohammed al-Megaryef, blamed the attack on a few foreign extremists who he said entered Libya from Mali and Algeria and pre-planned it with local “affiliates and sympathizers.”

And al Qaeda in the Arabian Peninsula claimed it was revenge for the killing of the terror network’s deputy leader Abu Yahya al-Libi in a drone strike in June.

Asked if she would describe Tuesday’s assault as an act of terror, State Department spokeswoman Victoria Nuland said: “I’m not going to put labels on this until we have a complete investigation.”

“We’re going to have a full investigation now, and then we’ll be in a better position to put labels on things.”

Libyan authorities are currently investigating the attack and have arrested 50 suspects, with the interior minister also sacking Benghazi security chiefs.

The FBI is also carrying out its own investigation which “is obviously going to lead us to the appropriate conclusions about precisely what happened and how it happened,” Nuland said.

In the initial wake of the attack, a senior US official, asking to remain anonymous, said “the working hypothesis” was that it was a well-planned assault by militants instead of the act of a rampaging mob.

While State Department officials have described what they called “a complex attack” by extremists, they have stopped short of saying what its motives were, arguing that was one of the purposes of the investigation.