The revival (or re-birth) of Pakistani cinema

The revival (or re-birth) of Pakistani cinema 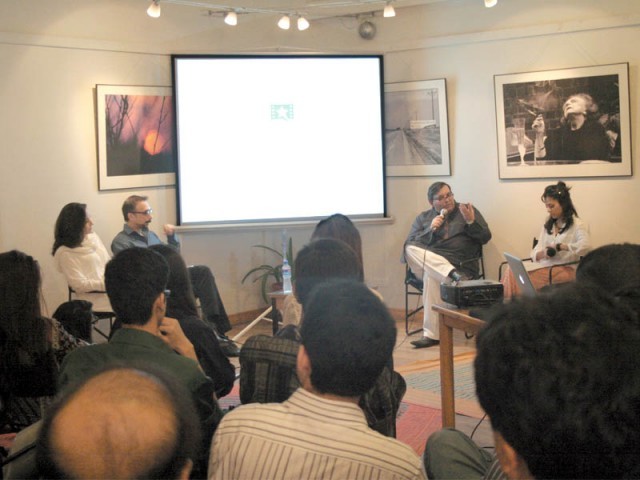 Pakistani audiences have started to move away from the gandasa culture of film-making over the years. PHOTO: ATHAR KHAN/EXPRESS

Will Pakistani cinema see a revival, or does it need to be built from scratch? This question was debated by prominent personalities associated with the craft of film-making at The Second Floor (T2F) cafe on Friday evening.

At the interactive discussion titled ‘The Revival of Pakistani Cinema’, the big names were Nadeem Mandviwalla, the visionary behind Atrium Cinemas; Asim Raza, a music video director and film-maker and actor-cum-film-maker Zeba Bakhtiar, the first female Pakistani actor to cross the border and appear in the  Bollywood film Henna. The questions tossed around by Meher Jaffri — producer of the film Seedlings, which recently bagged two awards at the New York City International Film Festival — focused on three things: content, money and professionalism.

In a time when the local audience is eager to watch every Bollywood movie that is screened in Pakistani movie theatres, Zeba Bakhtiar suggested that the focus should remain at home.“We should readily and eagerly collaborate with people in our own country,” she said. “It’s high time that we stop looking at India and focus on ourselves. We have good actors, good poetry and good music on hand, we can make as many films as we like.” She also noted that unlike India, Pakistan’s rich history of the Sufi tradition is a gold mine of inspiring ideas.

Bakhtiar also hinted at her upcoming directorial ventures, describing it as a “film that is going to be all about Pakistan.”

“We are always looking at the negatives surrounding us — the positives also need to be highlighted,” Bakhtiar asserted.

In the same spirit of patriotism, Asim Raza agreed that negativity does not work in the long run. “There should be a balance in the story line. I am certainly not talking in terms of escapism, that won’t work! But I am looking at positive stories and those will certainly make all the difference.”

Raza then delved into the issue that film-makers do not take their work as seriously as they should. He pointed out that more people need to make films as professionals, instead of merely pursuing a hobby or passion. “When I tell people that I am a film-maker, the follow-up question is usually ‘lekin aap aur kya karte hain (what else do you do)?” joked Raza, explaining that people do not consider movie making a serious profession.

“Before 2007, we were catering to another audience,” said Nadeem Mandviwalla. “Earlier, the gandasa culture was popular; it was because there were people in the audience that enjoyed viewing it. Now we have moved away from those times.”

He explained how the cinema-going culture in Pakistan has developed over the years. Now movie-watchers go more for the atmosphere rather than the film itself. “Atrium Cinemas cater to a crowd with more evolved tastes and idea of entertainment and fun.” He feels that instead of reviving it, Pakistan is in the process of rebuilding cinema.

Mandviwalla explained that the process cannot take place overnight and that Pakistani film-makers need to be realistic and make films within their budgets. “Many dream of making heavy budget films to garner big business, which rather than benefiting them, will add to their growing financial concerns,” he said.

Mandviwalla also asserted that the most popular genre amongst the audience remains to be romance. To this, Bakhtiar added, “Everybody wants to hear a love story, with the story line based on emotions and conflict about people breaking up — something which people can connect to globally.”

Giving advice to young film-makers in the field, Raza said, “To take film-making as a profession, not just a hobby and passion, you must have a business plan in mind. What we should now cater to is what I call ‘substantial cinema’ — a thought provoking, reason-to-believe and intelligent film, which will keep people glued to their seats throughout.”

At the end, Mandviwalla surprised the crowd with the announcement that Seedlings will be screened at Atrium Cinemas soon — a move that serves as a good boost to film-makers in the country who are aiming to revive and rebuild Pakistani cinema.