Zardari calls for an end to drone strikes

Zardari calls for an end to drone strikes 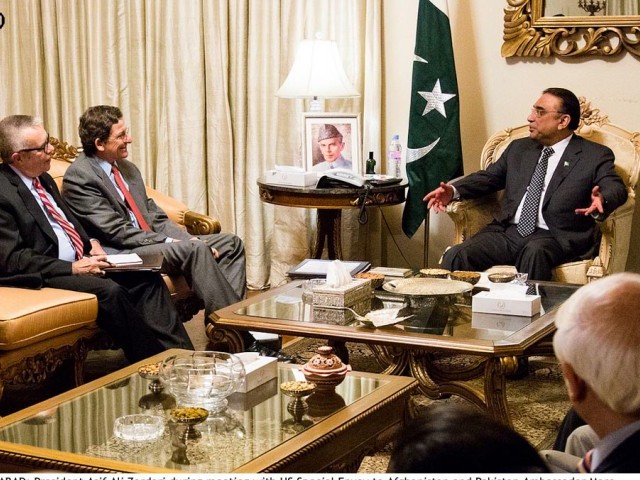 ISLAMABAD: President Asif Ali Zardari on Saturday called for an end to drone attacks, terming them counter-productive in the fight against militancy and in the battle of winning hearts and urged for alternative solutions.

President Zardari in a meeting with United States Special Envoy to Afghanistan and Pakistan Ambassador Marc Grossman at the Aiwan-e-Sadr on Saturday, discussed bilateral situation.

Senator Farhatullah Babar, while briefing newsmen about the meeting, said that Pak-US bilateral situation, fight against militancy, regional situation, drug trafficking and drone attacks were discussed during the meeting.

The president said that it was important for both the countries to work for greater engagements in all fields and to revive mutual confidence to further pursue mutual interest of peace and stability.

The president further said that Pakistan and US shared a common objective of defeating al Qaeda and crushing terrorism which could only be achieved through coordinated cross-border actions.

Referring to the burgeoning illicit drug trade, which according to a recent UN report contributed as much as $100 million to the Taliban insurgency, he said that heroine had been developed as a war weapon but it has now become a major financial source for militants. He urged the international to find a solution to the problem.

Zardari and Grossman discussed the regional conference due to be held at the end of the year and the need to formulate a common strategy against drug-trafficking in the region. The president pointed out that the goal of establishing long-term, sustained and durable Pak-US equation would remain elusive till the issue of trust deficit was solved in an effective manner.

The president also condemned the anti-Islam film produced in the US that has sparked protests in a number of countries. Stressing on the need for collective actions and respect for people from different communities or faith, he said that rationality and tolerance was fast eroding from the society.

“Pakistan regards its relations with US as very important”

Earlier, Prime Minister Raja Pervaiz Ashraf in his bilateral meeting with Grossman said that Pakistan regarded its relations with the United States as “very important” and that Pakistan valued it as a major development partner.

“We have a shared objective in fighting terrorism and need to cooperate more to get rid of this menace,” the statement said.

Ambassador Grossman said that future relations between Pakistan and the United States should be based on market access and trade.

The US government was working on a bilateral investment treaty to “facilitate” US investment in Pakistan and improve market access, according to the Pakistani statement.

It said that the United States has promised $200 million for the construction of Diamer-Basha dam in northern Pakistan.

Ties between Islamabad and Washington have been rocky for years, and have only just resumed after nosediving following the secret raid that killed Osama bin Laden and an air raid that accidentally killed 24 Pakistani troops.

Washington considers Pakistan’s semi-autonomous northwestern tribal belt as the main hub of Taliban and al Qaeda militants plotting attacks on the West and in Afghanistan.