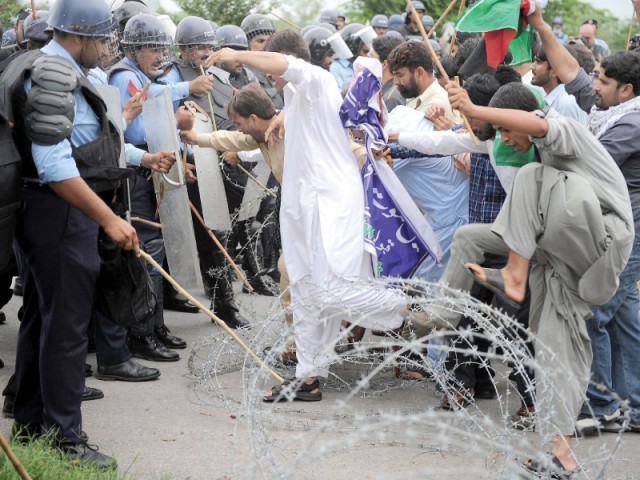 Protesters attempt to cross barbed wires as they try to reach the US Embassy during a demonstration in Islamabad. PHOTO: AFP

Hundreds of people demonstrated in cities across Pakistan, Middle East and North Africa on Friday to denounce an anti-Islam movie, which has sparked fury across the Muslim world, and in some cases, deadly violence.

At a rally organised outside the Karachi Press Club after Friday prayers, Jamaatud Dawa (JuD) reiterated its call to defend religious honour and riled up a crowd against the US and Israel. Around 200 JuD supporters attended the rally.

A large banner festooned on a makeshift stage read: “The US and Israel are responsible for the film blaspheming against the Prophet Muhammad (pbuh).”

“If the filmmaker is not arrested, the US envoy should be expelled, and diplomatic and trade relations with America should be snapped,” said Engineer Naveed Qamar, the chief of JuD’s Karachi chapter.

Supporters of the Majlis Wahdatul Muslameen rallied from G-5 Imambargah. They wanted to march up to the US Embassy but strict security arrangements prevented their forward march.

The protesters demanded that the hate film should be banned across the world and the filmmaker punished. They also called for the US to apologise over the film and the Pakistani government to expel the US ambassador.

Around 400 protesters rallied in front of Laal Masjid on the call of Jamaat-e-Islami. They called for the handover of Terry Jones, the controversial American pastor linked with the film, who has drawn protests in the past for burning copies of the Holy Quran. “Terry Jones should be handed to us for a trial in the sharia court,” a speaker told the gathering.

Like elsewhere in Punjab, protests were staffed by the Tehreek-e-Hurmat-e-Rasool, Jamiat Talba Arbia, Shehri Mahaz and JuD. Enraged protesters set fire to American and Israeli flags to vent their anger.

JuD chief Hafiz Muhammad Saeed urged the government to summon the US ambassador and lodge a strong protest over the disputed movie. “Such blasphemous acts are intentional and we will not tolerate this,” he told the rally.

Hundreds of activists of the Jamiat Ahle Hadees staged demonstrations outside the press club to condemn the anti-Islam film.

They were carrying placards and banners inscribed with various demands. Addressing the protesters, speakers condemned the film, demanding stern action against its maker. They called for such material to be condemned in the strongest terms by all Muslim countries, urging them to unite to foil the nefarious designs of anti-Islam elements.

Hundreds of Jamaat-e-Islami activists demanded the government close down the US embassy in Islamabad in protest against the anti-Islam film.  The rally was organized on the call of JI chief Syed Munawar Hassan.

Addressing the protesters, JI’s provincial chief Professor Mohammad Ibrahim said the film was an attack on the religious feelings of Muslims.

Similar rallies were staged in other cities of Khyber-Pakhtunkhwa, including Hazara division.

Mass rallies were held across Azad Jammu and Kashmir after Friday prayers, including in Mirpur district to protest against the movie “Innocence of Muslims”.

Calls for the rallies were given by various social, political and religious organisations. Speakers at the rallies in Mirpur, Muzaffarabad, Dadayal, Palandri, Kotli, Bhimbher and Poonch condemned the movie and its producer. They said the film would further fuel extremism and militancy.

Anti-US protests across the Muslim world over the film erupted into violence in Sudan, Lebanon and Yemen on Friday.

In Khartoum, around 5,000 protesters stormed the British and German embassies. Outside the German embassy, police fired tear gas to disperse protesters, as several of them scaled the roof of the embassy and tore down the flag to replace it with a black one.

In Tripoli, a crowd of 300 protesters attacked and set fire to a KFC restaurant, sparking clashes with police in which one person died and 25 were injured, a security source said.

The attack on the US fast-food chain’s outlet came as Pope Benedict XVI arrived in Lebanon for a three-day visit, calling for Christian-Muslim coexistence and attacking religious extremism.

In Sanaa, security forces fired warning shots and water cannon to disperse protesters trying to reach the US Embassy.

(Compiled from dispatches from our correspondents with additional input from agencies)