If factories were inspected, this wouldn’t happen: ILO

If factories were inspected, this wouldn’t happen: ILO

Sindh labour secret­ary fails to give number of regist­ered compan­ies in the provin­ce.
By Shaheryar Mirza
Published: September 15, 2012
Tweet Email 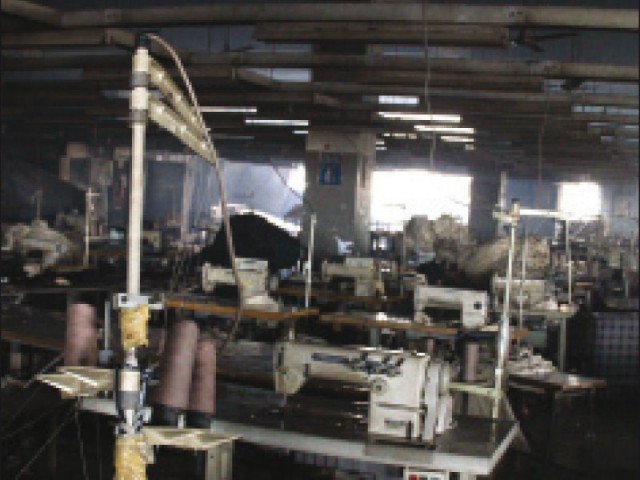 A photo of a work station at the factory after the fire. PHOTO: AYESHA MIR/EXPRESS

The International Labour Organisation (ILO) has deemed a lack of inspections as one of the main causes of the blaze in Karachi that led to the deaths of 258 factory workers.

“Labour inspections is the biggest thing. This is the result of a lack of a regimented labour inspection regime and these are the consequences,” ILO Country Director Francesco d’Ovidio told The Express Tribune after giving a press conference here on Friday. “If inspections were regularly taking place, this wouldn’t have happened.” At the press conference, he was flanked by Sindh Labour Secretary Arif Elahi, the Sindh Employees Social Institution Commissioner Danish Saeed and Waqar A. Memon of the Pakistan Workers Federation. The ILO is a specialised United Nations agency.

D’Ovidio said that in Pakistan, ratification of the law has never been a problem, and Pakistan is actually quite good at that – the problem is mostly in implementation.

“I found it quite shocking that the labour department wasn’t sure of how many companies were actually registered. This is a lack of knowledge,” he said, but added that, “The labour department is sincere in acting now, otherwise I wouldn’t even be here, and they are taking steps. This incident will boost political will.”

During the press conference Arif Elahi announced that the labour department will be taking steps, starting with an inquiry to find out who is responsible and a commission has been formed.  “I have asked for the report to be completed within five to six days and whoever is responsible, department official or whoever, we will take punitive measures against them. I have already suspended two officers in the area, so that an impartial inquiry can be carried out.”

The next steps his department will be taking concerns relief measures for which they will be giving out death grants to the heirs of the victims, in collaboration with the Workers Welfare Board.

All injured employees will get treatment at the expense of the government and those who are healthy but have lost their jobs because of it, will be compensated during their period of unemployment. For six months, the workers will get full salaries and for the next six months they will get half their salaries.

All companies are also being given one week to register with the department, voluntarily, and Elahi called on the entire business community to assist them and work collectively to achieve this. No punitive measures were announced for any company that does not abide by this. Elahi said that he will try to start work on infrastructure with the ILO’s assistance but said that he was not expecting a miracle.

“We don’t think that we can create the ideal conditions but at least we want to be able to meet the minimum TORs [terms of reference] in which workers would not be compromised,” he said. “We plan on educating employers, enforcers, officers in all the guidelines.” He is enforcing a mandatory five- to six-day course for his officers even if they know the rules as there is no harm in reinforcement. “We want to study the laws again and try and make some sort of a labour code.”

Elahi could not say how many companies were registered. He said, however, that all he knows is that the proportion of companies that are, is not a “good” proportion – meaning very few. He conceded that there were many grey areas in the department that need to be looked at and that while business owners did have legitimate concerns about harassment under the guise of inspections, a middle ground needs to be found so that inspections are done periodically.

The ILO will undertake a needs assessment first. D’Ovidio announced that economic and income skills training will be given to 500 members of the victims’ families so that another member of their family can start earning money in “decent and safer jobs”.

They will also be helping to provide training to inspectors and help increase efficiency for the registration of companies and labour inspections. They will also try to work to raise awareness among workers on how to deal with emergencies and what their rights are.  “The lack of inspections and number of inspectors needs to be addressed. I’d like to make an appeal to the community of donors that these are the lives of workers. Such tragedies happen but it is because of this that labour legislation has changed.”

As time runs out in morgues, the living line up