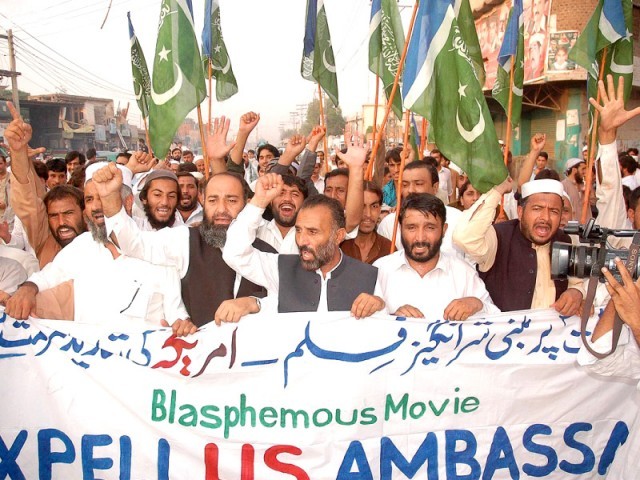 Peshawar activists of Jamat-i-Islami chant slogans against US during a protest against a film termed offensive. PHOTO: SANA

Following attacks on American consulates and embassies in Libya, Egypt and Yemen over an anti-Islam film, Pakistan on Thursday stepped up security measures around US diplomatic missions.

A mob stormed the US consulate in the eastern Libyan city of Benghazi on Tuesday, killing US ambassador Christopher Stevens and several other staff members.

There were also anti-US protests in Egypt’s capital Cairo and on Thursday a crowd stormed the American embassy complex in Yemeni capital Sanaa before being driven out by police.

“We have beefed up the security for the possible threats to the US embassy,” Khurram Rasheed, a senior police official responsible for diplomats’ security in Islamabad, told AFP.

“We expect some protests against the embassy tomorrow and we are preparing to handle that.”

The US embassy in Islamabad lies inside the city’s heavily-fortified diplomatic enclave, and Rasheed said the entrance would be closed and extra security forces deployed.

In Lahore, police said they have issued an alert to protect the US consulate.

“The security is already tight but we have issued an alert to be careful for any urgent situation,” Abdul Ghaffar Qaisrani, senior police official responsible for security, told AFP.

“We are also gathering information (on) whether some organisations are planning to organise some protests. In that case, we will take further measures to protect the US consulate.”

The low-budget movie, entitled “Innocence of Muslims”, which has sparked fury across the Muslim world, portrays followers of the faith as immoral and gratuitously violent.

Foreign Minister Hina Rabbani Khar criticised the film. “We have always promoted inter-faith harmony but desecration of any type is always condemned by Pakistan and we are very, very strongly condemning [this],” she said when asked about her government’s reaction to the disputed film.

In Peshawar, where anti-US sentiments run high and a car bomb attack on a US consulate vehicle killed two people on September 3, authorities said they were “cautious” about the developing situation.

The patrolling of police around the consulate in Karachi was also stepped up.

Meanwhile, nearly a hundred Jamaat Islami (JI) activists took to the streets to protest against the controversial film on Thursday evening, announcing that the party would launch more demonstrations on Friday.

JI’s Peshawar chapter took out a rally from the Landai Sarak area of Charsadda Road – condemning the “blasphemous movie” – and blamed the US government for financing it to incite Muslims.

Leading the demonstration, JI Khyber-Pakhtunkhwa (K-P) leader Mushtaq Ahmed Khan termed the US “a satanic empire” and claimed that this movie was released to inflame Muslim sentiments on the eve of 9/11.

He lauded the Arab states, particularly people of Libya and Egypt, for their opposition of the US — urging all Muslim countries to launch an economic and diplomatic boycott of the US.

The JI leader announced that his party will take out a rally against the blasphemous movie on Friday from the Mohabat Khan Mosque following Friday prayers.

Party’s K-P spokesperson Advocate Israrullah joined the chorus and said that Pakistani rulers were subservient to American’s interests; however, the Pakistani people will not tolerate this blasphemy.

Israrullah claimed that the US government was fully complicit in this controversy and urged the government to expel America’s ambassador from Islamabad immediately.

Traffic flowing from Charsadda to Peshawar was suspended for several hours due to the protests.

(WITH ADDITIONAL INPUT FROM OUR CORRESPONDENT IN PESHAWAR)