Karachi factory fire: Out of 259 dead, only 140 identified as yet

Karachi factory fire: Out of 259 dead, only 140 identified as yet

Around 115 bodies have been handed back to famili­es for burial.
By AFP / Web Desk / Faraz Khan
Published: September 13, 2012
Tweet Email 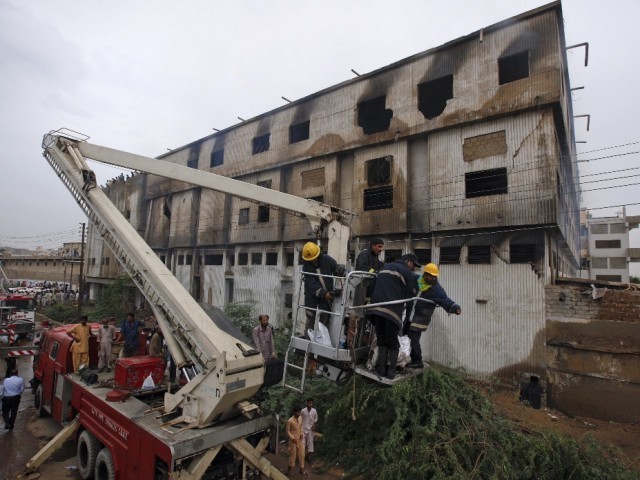 Around 115 bodies have been handed back to families for burial. PHOTO: REUTERS/FILE

KARACHI: With over 200 dead in country’s worst industrial disaster, only 140 bodies had been identified by Thursday morning, while 115 bodies have been handed back to families for burial, city police chief Iqbal Mehmood told AFP.

According to Sindh police surgeon Dr Kamaluddin Shaikh, around 259 people have died because of the fire.

Workers were suffocated or burnt alive at the Ali Enterprises garment factory in Karachi, which made ready-to-wear clothing for Western export, when a massive fire tore through the building during the evening shift on September 11.

Up to 600 people were working inside at the time, in a building that officials said was in poor condition without emergency exits, forcing dozens to jump from upper storeys to escape the flames, but trapping dozens in the basement where they perished.

Mohammad Bakhsh, 60, burst into tears and hugged his teenage grandson outside the Civil Hospital morgue when he was informed that son Mohammad Ashraf’s body had been identified.

“We are doomed, it is doomsday for us, Allah will help us to survive,” he sobbed.

Even 36 hours after the disaster began, several families still gathered outside the gutted factory hoping for news of their loved ones.

Just a few fire tenders were still working. There was thick smoke in the basement and it was still too hot to go inside, where boiling water formed a pool after firefighters spent hours hosing the flaming building.

“The place is too hot and smoky, it is too risky to go inside and clear the building. We are waiting for now,” chief fire officer Ehtesham Salim told AFP.

Ambulances continued to ply back and forth to the factory, even as funeral prayers for some of the dead had already begun.

Mohammad Arshad, a labourer, erected a tent outside his house in an impoverished neighbourhood near the factory for the funerals of his brother and sister-in-law.

“My elder brother and his wife worked in the factory and both have been missing since the incident. We’re not optimistic now and have arranged for their rituals once their bodies are identified,” he said, his eyes brimming with tears.

The couple’s children, a 13-year-old daughter and a nine-year-old son have not yet been informed their parents are probably dead, he said.

“They are too young and already confused. We’ll tell them once the bodies arrive.”

Owners must speak up

Sindh Chief Minister Syed Qaim Ali Shah, while speaking to media at the site of the incident, said that the owners have gone into hiding but cannot leave the country as their names have been placed in the Exit Control List (ECL).

“The owners must come forward and speak the truth, otherwise it can be assumed that they were responsible for the incident,” adding that the culprits wont be spared.

Shah also announced a compensation of Rs 0.5 million for families of the dead, while Rs 0.2 million for the injured.

According to the initial inquiry report of the fire, negligence on the part of factory owners and government departments resulted in the incident, Express News reported.

The report states that there was no emergency exit in the factory which employed more than 400 labourers.

Sindh government has requested all concerned authorities to submit a complete inquiry report within three days so that those responsible for the tragedy can be punished.

‘One of the worst disasters in the world’

Speaking to the media in Lahore, Pakistan Muslim League-Nawaz leader Nawaz Sharif termed the factory fire in Karachi as one of the worst disasters in the world.

He demanded that both the owners and concerned government officials should be held responsible for the incident.