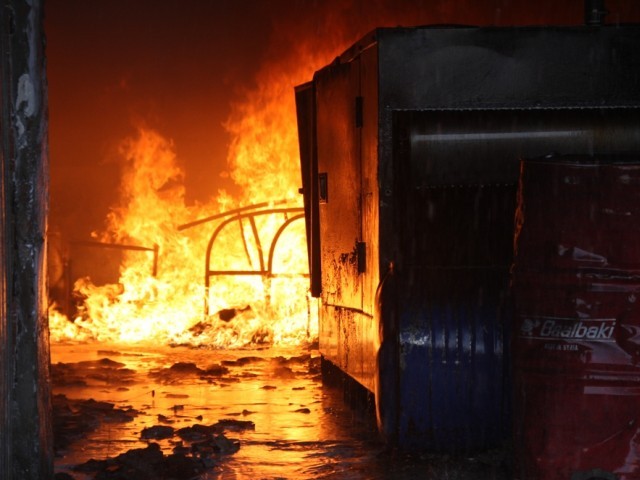 Prime Minister Raja Pervaiz Ashraf called Governor Latif Khan Khosa from China on Wednesday and asked him to prepare a report on the fire at a shoe factory at Bund Road. Ashraf told Khosa that on his way back from China, he would stop over in Lahore.

Chaudhry Pervez Elahi, the deputy prime minister, lashed out at the Punjab government for not making functional the burn unit the PML-Q government had “established” at Jinnah Hospital when he was chief minister. He said many of the people injured in the factory fire could have been saved had the burn unit been functional.

“How many lives do the rulers of the Punjab want to take?” he asked.

Separately, the Workers Party Pakistan called for Punjab government officials who had abolished labour inspections in 2003 to be held accountable.

Mirza Rizwan Baig of the Railway Worker’s Union, Hammad Qureshi of the Pak Telecom Labour Union, Nisar Shah of the Bhatta Mazdoor Union, Aasim Sajjad of the Workers Party Pakistan and Moazzam Shah of the Postal Workers Union said that the pitiful conditions in which the labourers were working showed the government’s lack of concern towards the welfare of the working class as well as its failure to implement international labour covenants.

The labour leaders said thousands of such small factories were operating in residential areas in violation of labour laws across the country. Workers in these factories are paid less than the minimum wage and are not provided with adequate facilities and occupational safety measures, they said.

Only four of those injured in the factory fire on Tuesday were admitted to the Mayo Hospital burn unit due to a lack of beds.

The rest of the patients are being treated either in the Emergency Department or Surgical Unit. The hospital administration said all injured were in stable condition.

“Ideally, all patients should be in the burn units but there is no space in it so we have had to shift burns patients to other units,” a doctor attending patients at surgical unit said.

The chief minister expressed condolences with the families. Meanwhile, the funeral prayers of eight of those who died in the fire were offered in Okara.

The planned burn unit at Jinnah Hospital has remained non-functional for the last four years,” the YDA statement said.