Twenty20 series: It was a big emotional moment for me, says Yuvraj Singh

Twenty20 series: It was a big emotional moment for me, says Yuvraj Singh 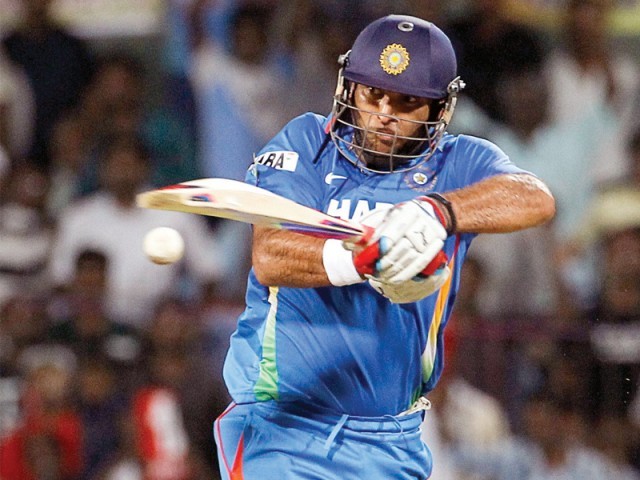 Yuvraj was man of the tournament in India’s World Cup triumph last year and his return is a big boost to their World Twenty20 hopes. PHOTO: REUTERS

CHENNAI: New Zealand pipped India by one run in a thrilling Twenty20 International in Chennai on Tuesday to ruin cancer survivor Yuvraj Singh’s return to cricket.

Brendon McCullum smashed 91 off 55 balls as the Kiwis posted 167 for five and then restricted the hosts to 166 for four despite Virat Kohli’s 70 from 41 deliveries and a valiant 34 from Yuvraj.

McCullum took 32 balls for his ninth half-century in Twenty20 Internationals and twice hit off-spinner Ravichandran Ashwin over the ropes. His other six came off Yuvraj. McCullum was looking good for his second international century in this format when Pathan foxed him with a slower delivery which the batsman dragged on to his stumps.

Yuvraj, who was treated for a rare germ-cell tumour between his lungs earlier this year, was given a thunderous welcome by the crowd at MAChidambaram Stadium as he walked out to bat. The left-hander was lucky early in his innings when his top edged eluded McCullum and Kyle Mills who were involved in a nasty collision.

Yuvraj bowled two wicketless overs for 14 runs, took a catch and hit one four and two sixes. But it was not enough to secure victory for his team as the Black Caps fought back in the final overs to pull off a brilliant win in front of 25,000 disappointed home fans.

“There are mixed emotions,” said Yuvraj. “We lost a game that we should have won, but for me personally it was a big emotional moment to get on the field. I had tears in my eyes when we were fielding, luckily the cameras did not catch it. I think I am timing the ball well and it can only get better from here.”

New Zealand clinched the two-match series, a tune-up for next week’s World Twenty20 in Sri Lanka, after the opening game was washed out in Visakhapatnam on Saturday.

“This win will give us a lot of confidence going into the World T20,” said New Zealand captain Ross Taylor. “Kohli could have taken it away from us, but Franklin really needs a big pat on the back.”

Dhoni believed that India should have won the match considering their position after the 12-over mark.

“They bowled brilliantly and the wicket slowed down a bit which made it quite difficult for us. This was a game which we should have won,” India captain Mahendra Singh Dhoni said.