Restor­ation proces­s will start by the end of Octobe­r and it will take around four months.
By Rameez Khan
Published: September 11, 2012
Tweet Email 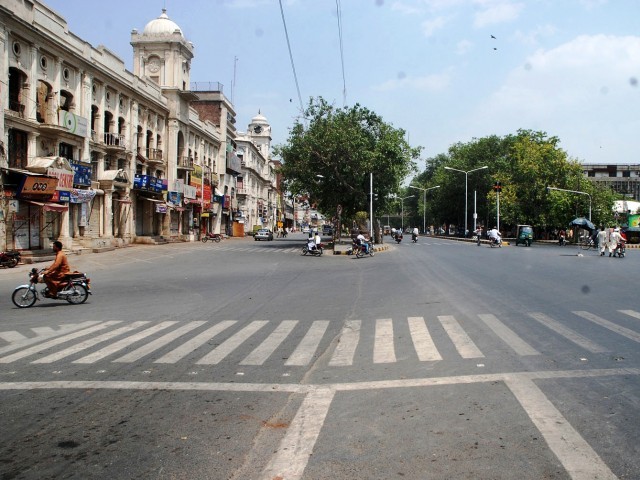 The preservation work will be executed by the EDO for municipal services with assistance from the EDO for works. PHOTO:FILE

A project for the preservation of the facades of four historic buildings on The Mall has been approved and will begin soon, The Express Tribune has learnt.

An initial Rs10 million for the project will be paid by the city government and the rest by the Punjab government. The preservation work will be executed by the executive district officer (EDO) for municipal services with assistance from the EDO for works. The Engineering and Consultancy Services of Punjab (ECSP) is acting as a consultant.

EDO (Municipal Services) Masood Tamana said that the Punjab government had approved the summary for the project a day ago. An initial summary was sent to the Punjab government and approved several weeks ago. A second summary, for the hiring of the ECSP as consultant, was submitted and approved later. A total of 169 buildings in the city have been declared special premises under the Punjab Special Premises Ordinance of 1985, which prohibits the destruction of the buildings or the installation of bill postings, neon signs and other kinds of advertisements.

Project architect Zahid Usman of the ECSP, who is also a lecturer at the National College of Arts, said the historic facades of the four buildings on The Mall would be restored, right down to the original light post designs. He said that the government should try to restore all the historical buildings in the city.

He said that it had initially been proposed that seven buildings be preserved owing to their historical significance and vulnerability. The government decided to exclude the Dayal Singh Mansion, Sir Ganga Ram building and General Insurance building from the initial list of structures to be restored because they were in decent shape for the time being.

Usman said that the first step of the project was to document the current condition of the buildings and collect the original design and maps and scan them to create a record. He said that this would take about a month for the four buildings.

“We will start the restoration from the end of October and it will take around four months. We have spoken to stakeholders and they are ready to cooperate in removing signboards,” he said. “Once it is finished, you should not be able to see the air-conditioners on the outside.”

Usman said that the ECSP would try to establish a resource centre containing a record of all the historical building in Lahore. “If any person wants to restore a building, they could get the record from the resource centre,” he said.

He said that The Mall was developed in the 1880s under the British, but there were buildings located there earlier. The Chief’s Court, now known as the High Court, has been there since the 1860s. The National College of Arts and the Lahore Museum were built in 1872 while the Governor’s House is a Mughal-era building. He said that there were over a thousand buildings in Lahore that had historical significance.

The city district government had earlier helped preserve and restore the facades of houses on the Food Street at Gowalmandi and has also done so with houses on the new Fort Road Food Street. The historic Pak Tea House at Neela Gumbad is also currently being restored.

Service structures: Court tells young doctors not to think of another strike