Traffi­c on the bridge was suspen­ded in July after engine­ers declar­ed it unsafe.
By Shabbir Mir
Published: September 9, 2012
Tweet Email 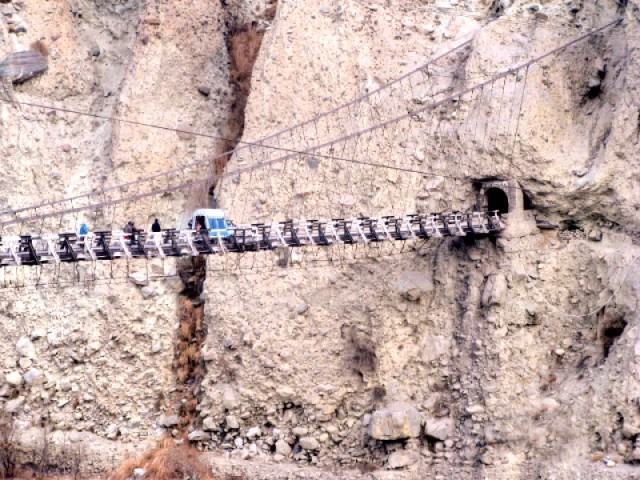 The 510-feet-long bridge was suspended for traffic after being declared unsafe. PHOTO: SHABBIR MIR/EXPRESS

Despite being blocked for traffic, passengers travelling from Danyore to Gilgit forced their way through the dilapidated Danyore Bridge on Saturday, risking their lives on the suspension bridge that was declared unsafe for travelling earlier. However, it was shut down once again when authorities found out about it three hours later.

The 510-feet-long bridge that connects Danyore to the capital city of the mountain region was shut down for traffic on July 24 after a team of engineers inspected it and declared it unsafe for traffic. According to an official at the Gilgit Control Room, no decision had been made to resume traffic since then.

However, defying government orders, people removed the barriers and started using the bridge which has been weakened by heavy traffic.

“We want the authorities to know that the bridge is important to us and it should be repaired,” said one of the passengers while criticising the delay in repair work.

Dubbed as “Pul-e-Sirat”, the bridge connects to a 10-metre curved tunnel that tests a driver’s nerve more than his skills as an abrupt stop can leave a vehicle stranded in the middle of the stream. It was built around 40 years ago, and has served as the only route to Gilgit for thousands of people in Danyore, Bagrote and Jalalabad after the China Bridge collapsed four years back. Currently an alternate bridge, built four months back near the former China Bridge, is the only link to the capital city.

Correction: An earlier version of this article misspelt Danyore as Damyore. It has been corrected.