KRL to defend title but partic­ipants fear being beaten by the crowd.
By Natasha Raheel
Published: September 4, 2012
Tweet Email 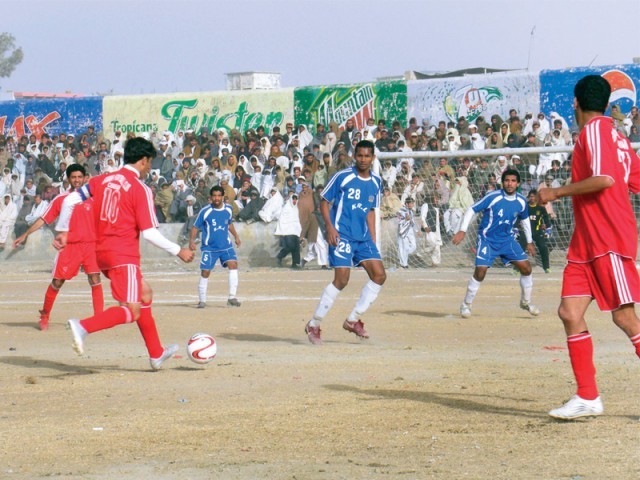 Teams fear being beaten by the crowds in Chaman and Quetta, the venues that serve as the home grounds for Afghan FC. PHOTO: APP

KARACHI: The ninth edition of the Pakistan Premier Football League (PPFL) kicks off today, with KRL launching its title-defence against PAF, while Wapda’s aim will be to regain  supremacy that saw them being crowned national champions four times.

The focus, however, will fall first-up on Afghan FC who were forced to give up on their home ground in Chaman and play in Quetta instead. The new venue, chosen after teams expressed reluctance in visiting Chaman, is as risky, according to Afghan FC’s captain Jadeed Khan.

“Quetta is our second home but we have had to compromise,” Jadeed told The Express Tribune. “We still want our matches at our home ground and for us that’s Chaman. No place in Pakistan is secure these days so I don’t think the teams should be scared when we assured them full security.”

Teams have expressed reservations regarding security and the rowdy crowd in Chaman and Quetta. However, the Pakistan Football Federation (PFF) Tournament Director Pervez Mir feels they cannot completely discard holding matches in these cities because of the popularity of the sport there.

“We have decided to support Afghan FC and Muslim FC’s request. It will be unfair if we take away matches from their home grounds,” said Mir. “The kind of enthusiasm that we see in Balochistan for football is something that PFF can capitalise on. We have formed an inspection committee which will ensure the law-and-order situation is intact. Therefore, other teams should not have any reservations.”

According to the Pakistan Navy coach, Commander Mehfooz, whose team refused to play in Chaman last year, said that playing under these security conditions was not worth risking their lives. Wapda coach Khalid Butt also expressed his scepticism about the facilities and pitch conditions in Chaman and Quetta.

“The basic needs of having a green field and security is something every player wants but we hardly ever get that in Chaman, so it’s right to have matches else where. We also get beaten by the crowd which is unacceptable,” said Khalid.