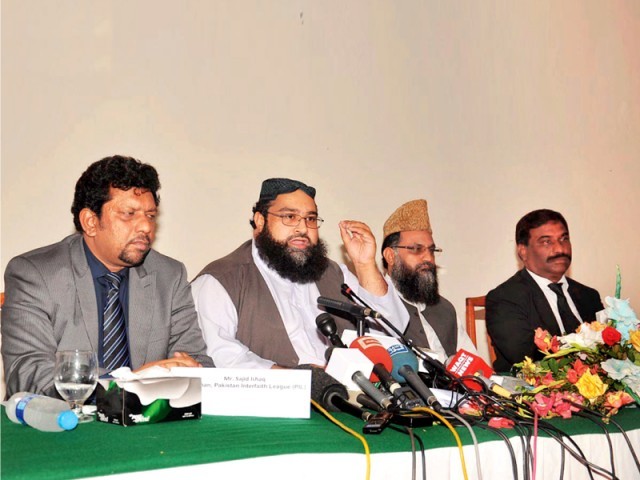 Even vociferous supporters of the blasphemy law have come out in support of Rimsha Masih, the 11-year-old girl allegedly suffering from Down’s Syndrome, who was accused of burning pages inscribed with Quranic verses last month.

At a packed press conference, All Pakistan Ulema Council Chairperson Allama Tahir Ashrafi demanded bail for Rimsha and the trial under the blasphemy act of Khalid Jadoon Chishti, who is accused of planting evidence against the minor and has also been booked under the blasphemy law for allegedly desecrating the Holy Quran.

Accompanied by representatives of the Pakistan Interfaith League, Ashrafi said in a fiery speech that the council itself would provide protection to the girl if the government was scared of a reaction from extremist elements.

Ironically, Ashrafi’s support for Rimsha stems from his concern for the blasphemy law.

“There is a conspiracy to abolish the blasphemy law and investigators (of Rimsha’s case) should expose elements behind this act,” Ashrafi said. “We condemn the reports about the interior ministry’s request to the court to deny bail to Rimsha due to security threats. We are ready to take the responsibility of protecting Rimsha and the court should release her immediately,” he maintained.

The ulema council also sought the formation of a joint investigation team (JIT) to probe the case against Chishti and seriously investigate the conspiracy behind registering an FIR against Rimsha under pressure from the local community.

Commenting on the blasphemy law, Ashrafi insisted that there was no flaw in the law itself and rather, the problems arose out of its implementation. “Under the law, an FIR in such cases should be registered after a thorough investigation by a Superintendent Police (SP)-level officer, but in most cases, FIRs are registered by SHOs without investigation,” Ashrafi said.

The council chairman also urged that a comprehensive mechanism be put in place to strengthen the implementation process for the blasphemy law.

“The law is being misused due to loopholes in the implementation process. Making a mockery of this important law should end once and for all,” Ashrafi said. “We are treating this case as a test case and it will help discourage the misuse of the blasphemy law,” he added.

Ashrafi noted that Rimsha’s case had tarnished Pakistan’s international image further, and blamed this on the weakness of the government and the inefficiency of law enforcement agencies.

Pakistan Interfaith League Chairperson Sajid Ishaq said evidence proved that Chishti himself disrespected the Holy Quran. He demanded protection not only for her and her family but also for the rest of the Christian community in Pakistan.

Ishaq informed the media that two committees were formed under the supervision of Supreme Court Advocate Gabrial Francis and President of the Tehreek-e-Tahafuz-e-Madaris Maulana Zahid Mehmood Qasmi. One committee is to investigate the Rimsha case and another committee has been given the responsibility of rehabilitating the displaced families of Meherabadi.