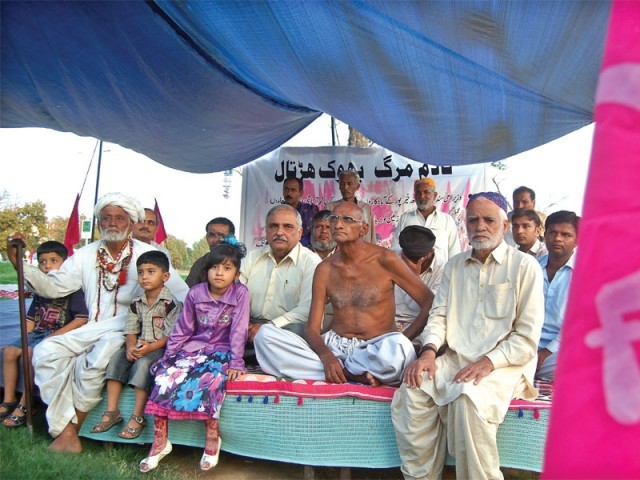 Ghulam Rasool Sehto sits at the hunger strike camp along with his companions. PHOTO/MUHAMMAD JAVAID/EXPRESS

Comrade Sehto, 65, who has been struggling for farmers’ rights all his life, is encamped outside the National Press Club (NPC) to highlight their hardships due to closure of water to the lands of farmers. President of Hari Committee, Sehto belongs to Mehrabpur, Hyderabad and has been on hunger strike unto death for the last over 100 days. He went on hunger strike in Sindh and after getting no response from the provincial government moved to Islamabad two weeks ago.

Accompanied by affected farmers, Sehto is protesting against the diversion of water by influential feudals backed by local members of national and provincial assemblies for the past 20 years.

Sehto told The Express Tribune that over 300,000 acres of agricultural land had been destroyed due to shortage of water and non-functional tubewells in Khairpur district. He said poor farmers could not fight the powerful feudal lords who have stopped the water to their land. “I came from Khairpur on Eid day in an ambulance to register my protest in the federal capital  for the past almost two weeks.”

Talking about the hardships small farmers have to face, Sehto claimed the irrigation system of Sindh has been destroyed. Local MPAs and MNAs in connivance with irrigation officials steal water, resulting in the destruction of billions of acres. He said of the 645 tubewells installed in Khairpur in 60s, only 100 were functional.

He claimed farmers’ children were deprived of education. “Out of the total 49,000 government primary schools, 41,000 are non-functional and our children are unable to get an education.’’

The veteran Hari leader regretted the apathy and inaction of the government and the judiciary. “Why doesn’t the chief justice take suo motu action of this; isn’t it a public interest issue when the future of  hundreds of thousands of farmers is at stake?” he questioned. “I have sent an application to the Supreme Court requesting the chief justice to take action, otherwise I have no option but to continue my struggle to save the land of Sindh and to protect its farmers,” he added.

Zamir Hussain Sehto, another affected farmer from Khairpur also criticised influential landowners for depriving them of their share of the water. “The basic aim of the hunger strike is to inform people about the harsh realities in Sindh, where small farmers are being exploited.” He said the struggle would continue till their demands are fulfilled.

The activist said he twice called off his strike, the first time after 17 days and then after 31 days upon assurances given by Sindh Chief Minister Qaim Ali Shah.

Repeated attempts to contact MNA Dr Nafisa Shah, who belongs to Khairpur and is Sindh chief minister’s daughter, were unsuccessful.

Meanwhile Awami Party Pakistan leader Ayub Malik described Sehto as the Gandhi of Pakistan for continuing his hunger strike for so long and vowed to support the haris struggle. He condemned the government and the judiciary for their indifferent attitude and inaction towards the genuine problems of the people.

Sustainable development is critical to save the ecosystem