Over 2.9m people regist­ered with Nadra belong to seven faiths other than Islam.
By Irfan Ghauri
Published: September 2, 2012
Tweet Email 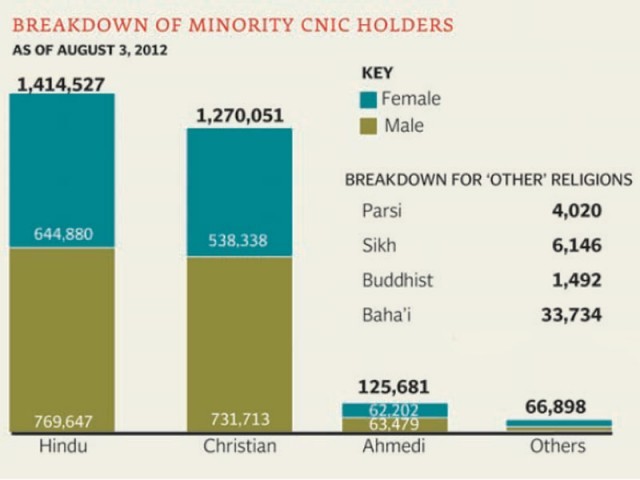 Over 2.9m people registered with NADRA belong to seven faiths other than Islam. SOURCE: NADRA

Pakistan is not as monolithically Islamic as popular perceptions would have you believe.

Besides large Christian and Hindu communities, the country has a sizable population of people following the Baha’i faith, in addition to adherents of Buddhism, Zoroastrianism and the Ahmadiyya community, reveal unprecedented statistics released by the National Database and Registration Authority (NADRA).

In all, adherents of at least seven different faiths, besides Islam, live in Pakistan and comprise more than 3% of all adult Pakistanis who posses computerised national identity cards (CNIC).

Based on scientific projections (the 1998 census plus a 3.2% yearly increase in population), NADRA estimates that 96% of the total adult population now posses an identity card.

The statistics were gathered from application forms filled at the time of applying for a CNIC. Among other information, the forms include a column on religion the applicant belongs to.

According to the statistics, the Hindu community is the largest minority group possessing CNICs, with 1.4 million adherents. Christians follow, with 1.27 million followers possessing a CNIC.

Besides these minorities, the data shows there are over 33,000 Pakistanis who declared themselves as followers of the Baha’i faith, 6,146 Sikhs and over 4,000 Zoroastrians, or Parsis.

Interestingly, around 1,500 adult citizens holding CNICs declared themselves as Buddhists.

NADRA Chairman Tariq Malik told The Express Tribune that his organisation was especially focusing on non-Muslims to acquire CNICs and register themselves as voters.

Malik said he held meetings with leaders of various minority faiths, asking them to persuade their communities to obtain identity cards.

With a sizeable turnout of minorities at polling booths in the elections, no political party would be able to ignore them in the upcoming polls, Malik said.

According to the chairman, the column of religion in the CNIC application form was not a mandatory column, stating it was the choice of each individual whether he or she wanted to declare their faith or not.