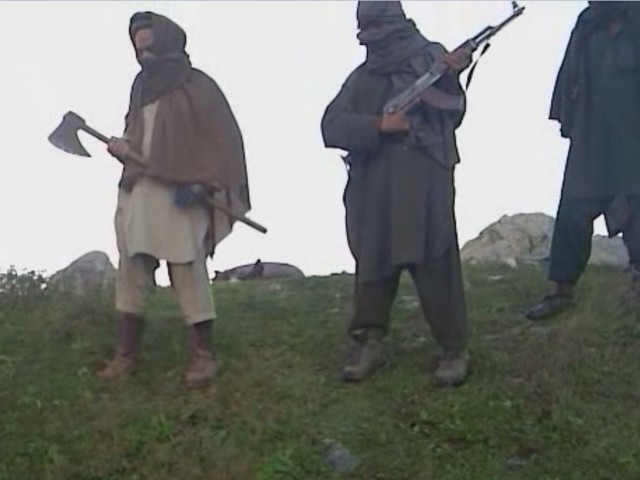 This screen grab from a video released by the Taliban to the AFP shows men wielding an axe and AK-47 rifle as they stand over severed heads of Pakistani soldiers. PHOTO: AFP

KHAR: The Tehreek-e-Taliban Pakistan (TTP) released a video on Friday showing what appeared to be the severed heads of a dozen Pakistani soldiers. Pakistani security officials had already confirmed that 15 of their soldiers went missing three days ago after a clash with the militants.

“Praise be to God that the mujahideen in Bajaur agency have managed to kill the infidel soldiers of Pakistan,” he says.

“Many of them were killed by bullets, 12 of them as you see have been beheaded, you see 12 heads here, and more heads are on the way.”

The commander is flanked in the footage by armed men including one wielding a huge axe.

Confirming the reports of missing soldiers, a senior security official told AFP, “At least 15 of our soldiers are still missing.”

Another security official said “more or less” that number of soldiers were missing but declined to give the exact total.