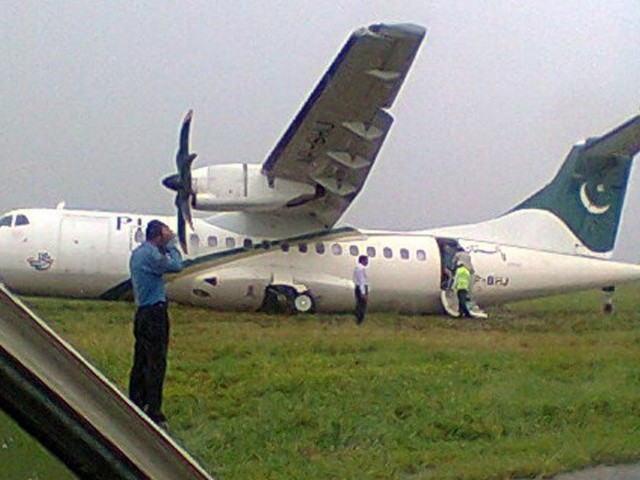 LAHORE: The passengers and crew members remained unhurt when a Pakistan International Airlines (PIA) plane skidded off the runway on its landing due to heavy rain, said a PIA spokesperson on Friday.

The ATR plane, flight PK-653, was on a routine flight from Islamabad to Lahore and was carrying 42 passengers and four crew members.

According to PIA, the pilot controlled the plane when it skidded but the main gear of the aircraft collapsed.

The PIA said that the damage of the aircraft will be assessed and an inquiry will be conducted into the incident.

The runway for larger aircrafts at the airport, on which the incident took place, was closed down immediately after, however the other runway for smaller aircrafts remains functional.

Some earlier reports suggested that the plane had made a crash landing and the flight staff and passengers sustained minor injuries. However, the PIA spokesperson negated the reports.

Earlier today, a Lahore-bound PIA plane made an emergency landing in Quetta due to technical problems.

It was earlier reported that almost a third of PIA flights have suffered delays this year due to technical and administrative reasons, dealing a severe blow to the national flag carrier’s business.

Correction: An earlier version of this story stated the plane was resting on its “left” instead “right” side. The error is regretted.