The actor has risen to fame by playin­g negati­ve roles in Lollyw­ood films over time.
By Sher Khan
Published: August 29, 2012
Tweet Email 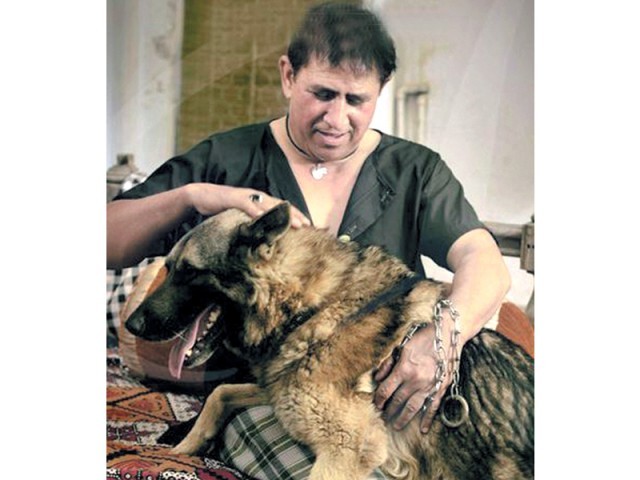 Cheema says that the trick to being a successful villain is to focus on the eyes. PHOTO: SHAFIQUE MALIK/ EXPRESS

While some actors make it big as majestic heroes in popular films, others rise to fame by donning more negative roles. An example of such an actor is Shafqat Cheema, now best known for the antagonist he played in the 2011 film Bol. Cheema has made his career by bringing to life the characters of pimps, gangsters and villains.

In conversation with The Expresss Tribune, he gestures to his eyes and says that he takes pride in staring down some of the greatest ‘heroes’ in the subcontinent.

Cheema graduated from the Jamia Naeemia religious school in 1974, and says that he stumbled into acting when he walked into the Shahnoor Studio by chance and decided on a whim that he wanted to be an actor. He struggled for nearly 12 years before being offered a lead role in the 1989 film Kalka, which also starred Sultan Rahi.

Today, he prides himself in his ability to reinvent any role. “No matter how redundant the role is I am able to reinvent it and bring something new to it,” says Cheema. “All that I have achieved has come after a 20-year journey. I would take a 25 mile tanga ride to studios, but when my first film came out, I never looked back,” he adds.

Elaborating on his acting career in negative roles, Cheema states, “The art of being a villain lies in maturity and the willingness to immerse yourself in a role, so that the hero can feel your presence.” He further elaborates that when a writer provides him a role, his goal is to immerse himself in it. His mentors always told him that no one would make him a ‘hero’ but if he worked on several small roles then directors may give him a lead negative role.

“When I started negative roles, my mentor showed me clips of an Anthony Quinn film, and I learnt that the trick was to focus on the eyes,” says Cheema who has about 80 films to his credit. Talking about an on-set experience, Cheema proudly reminisces, “I looked into the eyes of Sultan Rahi, and he told the director to take me out of the scene because he was afraid of my eyes.”

“It’s really no one’s fault, it’s actually a mindset,” says Cheema. Elaborating on the restrictions faced by directors he further states, “Producers seem to have become gods because they say they have invested their money in the film, which was never the case in the past. It used to be a more collaborative process in which the director would have discussions with the producer— but now the producer comes with a story ready from home.”

Along with the directors, Cheema explains that actors also face a hard a time. For instance, if a producer comes up with another Gujjar film, most of the times actors are left without any options.

“Look at Shaan, he is the hero of our industry, but he is pushed into a corner where he is forced to be a Gujjar Da Kharak,” says Cheema. “These same producers cursed at Shoaib Mansoor, who really pushed for a new sort of film-making,” he adds.

Cheema has several projects lined up for the near future. He will have a key role in Humayun Saeed’s Boom Boom, the lead in Muhammad Hamza’s Kambakht and also star in Chameli, directed by Salman Jilani.