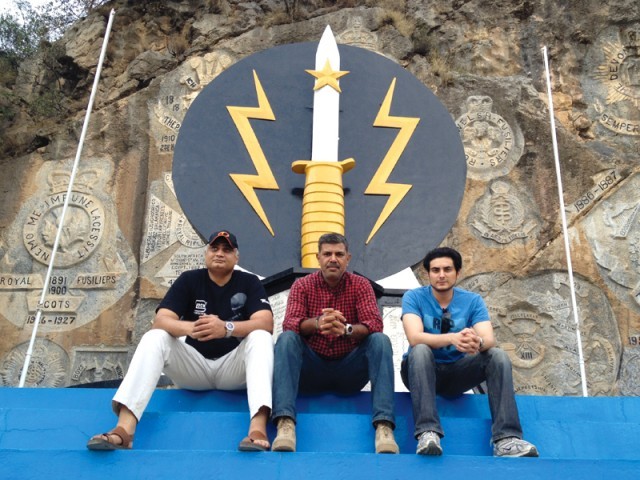 Rana feels that producers have left the film industry because the finances and numbers just don’t add up. PHOTO: PUBLICITY

Bilal Lashari’s debut film Waar has created quite a stir in Pakistan. Since the trailer’s release a few months ago, film enthusiasts are waiting for what promises to be an action-packed movie.

And why shouldn’t fans be excited? CEO of Mind Works Media Dr Hassan Waqar Rana isn’t your conventional producer. In fact, his decision to spearhead the project has been somewhat of a surprise. He strongly feels that this film could mark the beginning of a new and transformed Pakistani film industry due to its unique storyline. While the rough cut of the film is ready, the date of release will be confirmed once the film’s distributors, both local and international, come to a consensus.

“I firmly believe that the difference between absolute genius and absolute crazy is the level of success an individual achieves,” says Rana, in regard to his film’s original concept. “And whether I’m a genius or a complete moron will be decided by the viewers of the film.”

When asked what inspired him to make a film based on the theme of terrorism amongst the romantic, drama-filled clichéd Pakistani films, he laughs: “Either I see potential in our dormant film industry or I have completely lost it and decided to commit ‘financial suicide’ through its release — it’s either of the two.” He adds that several producers have left this industry because they were smart, since “the finances and numbers just don’t add up anymore.”

While the star-studded cast includes names like Shaan Shahid, Shamoon Abbasi, Ali Azmat, Aisha Khan, Meesha Shafi and Hamza Ali Abbasi, Rana could not have been more pleased with the film’s director Bilal Lashari. “I needed someone who was as crazy and passionate about films as I am — an absolute genius behind the camera, someone who could sacrifice everything for his craft,” says Rana, praising the director. “There was only one person who fit the bill — Bilal Lashari.” Although Lashari has never before directed a movie, Rana seems to have no problem, since Waar is his first attempt at writing and production.

“The pride-swallowing siege of actually making a Pakistani film and that too with a new idea — a first of its kind action-thriller, has been a long road,” he says. Rana has been deeply involved in not only writing the script but also helping out with the film’s direction — which is why the film has been delayed.

“We have great writers if you want to make a romantic or run-of-the-mill film,” he continues. “But we certainly lack those with the ability and depth to write a serious action-filled suspense thriller,” Rana adds regrettably, explaining that he scrapped eight writers in the process of making his script. “If someone thinks they are good writers, then please do get in touch with me asap,” he says in a humourous tone.

“They would write incomplete things like ‘the hero is holding a gun’ whereas I wanted the script to be more accurate — the audience should know which gun he was holding [a Glock or a Beretta], why it was the weapon of choice, and if he’s in a better or worse position than the villain [further describing which weapon the bad guy is packing],” he explains, referring to the writers he came across while working on his script.

He further elaborates on the obstacles the production team faced: “The inevitable delays took place because most of the scenes were shot at actual locations using real ammunitions, explosives, helicopters and boats. These require permission and financial arrangements, which take time.” As far as actors are concerned, Rana adds that there’s only a dearth of actors who are prepared to take on action roles. “Sure, we have great actors but they are all busy working on TV dramas,” he says.

Commenting on the film industry as a whole, Rana feels it doesn’t have any financial advantage or support. “There is hardly any corporate sponsorship available for films and even if there is, it’s mostly for foreign films,” he states, disappointed with the lack of funds for the film industry. “Our track record isn’t impressive enough to instill confidence in investors.”

However, he is hopeful that things will change soon as very talented and promising people are entering the industry and making good movies. Good luck, team Waar!

Drowning Shadows: The trials and travails of a first time novelist