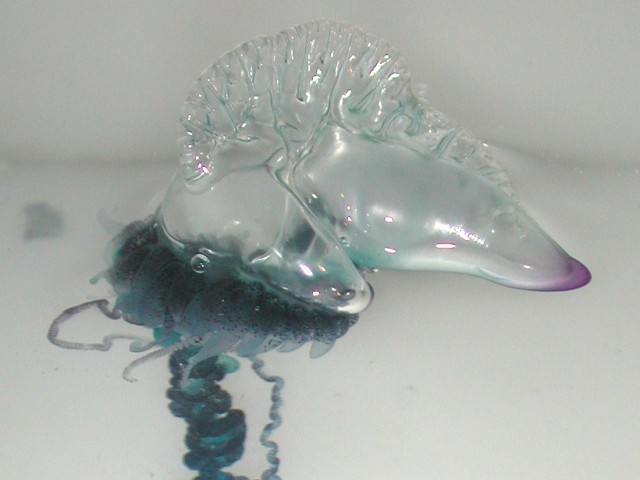 When a bluebottle stings, the tentacles cling on to the skin. They need to be removed to reduce the pain and stop the flow of venom. PHOTO: WIKIPEDIA

KARACHI: The beach draws Karachi’ites in the hundreds during the monsoon season but the change in climate also brings unwanted visitors: the Portuguese Man o’ War, popularly known as the bluebottle.

Syed Muhammad Ahsan, the administrator of Aman Foundation’s Pakistan Aquatic Life Saving (PALS), said that hundreds of people have been stung daily over the past few weeks. At Paradise Point on Monday alone, ten people were hit. “You can just stand at the beach and look both ways and you will see people crying every few feet,” he quipped.

This is still a low number, he says as the number of bluebottles has been declining over the years. “You have a couple of hundred thousand people at the beach and only ten have been stung,” he said. “That is not a high number and that is how we know that [bluebottles] are dropping in number.”

As long as the monsoon season persists, people should be wary of bluebottles. The peak comes at the very end of the season, which according to the meteorological department will be on September 15.

The stings are not deadly but cause severe pain that can last up to an hour. In some cases, the venom travels to the nymph nodes, intensifying the pain. Some people are allergic to the venom and can develop fever or go into shock.

Ahsan said that if the pain lingers for longer than an hour, the victim should be taken to a hospital and given painkillers. When a bluebottle stings, the tentacles cling on to the skin. They need to be removed to reduce the pain and stop the flow of venom.

“The easiest way to treat a sting is to put saltwater and then hot water or ice on the affected area. But they are not easily available on the beach,” said Ahsan. “Our lifeguards try to store warm water as well as painkillers and ointments at several points along the beach. One should be careful not to rub water into the sting,” said Ahsan.

The bluebottle is not a jellyfish but rather a marine invertebrate. Even detached tentacles or dead bluebottles can sting.

Ahsan said that bluebottles are very hard to spot as their colour makes them blend in with the water. The best way to avoid getting stung while swimming is by wearing a wetsuit and other skin-hugging material.