One in five Japane­se firms wants to see the share of nuclea­r power in the electr­icity supply reduce­d to 0 by 2030.
By Reuters
Published: August 27, 2012
Tweet Email 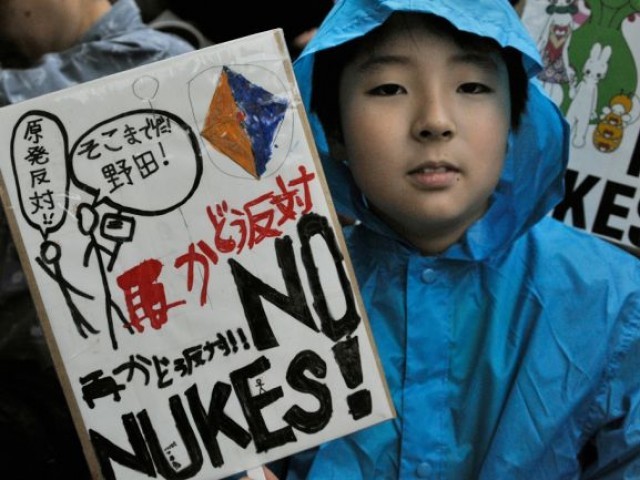 A boy holds a banner denouncing nuclear power plants during a protest in front of the official residence of Japanese Prime Minister Yoshihiko Noda in Tokyo on July 20, 2012. PHOTO: AFP/FILE

TOKYO: About one in five big Japanese  firms wants to see the share of nuclear power in the electricity supply reduced to zero by 2030, a Reuters poll showed, amid a growing anti-nuclear clamour after last year’s Fukushima atomic disaster.

But underlining concerns about a rise in energy costs without atomic power, the rest of the respondents supported a continued role for nuclear energy, with the biggest group opting for a share of 15 percent.

The poll comes as Prime Minister Yoshihiko Noda considers options for a medium-term energy plan while vowing to reduce reliance on atomic energy without saying by how much or when.

Energy policy has become a major headache for Noda and his Democratic Party of Japan, its ratings battered ahead of a general election likely to take place in November and give the ruling party a drubbing.

The government is considering three options for its energy portfolio: reduce nuclear power’s role to zero as soon as possible, aim at 15 percent by 2030, or seek a 20-25 percent share by the same date.

The share was about 30 percent before the disaster, which forced the government to scrap a 2010 plan to boost nuclear power’s share to more than half of electricity needs by 2030.

In the Reuters poll, 19 percent of big firms sought to cut nuclear power’s role to zero, but 39 percent called for 15 percent by 2030, as a majority of companies brace for slower economic growth as reliance on nuclear energy declines.

One-quarter said they wanted to see a 20-25 percent share and the remainder called for even greater percentages, according to the poll of 400 big firms, taken alongside the monthly Reuters Tankan business sentiment survey. A total of 268 responded during the Aug. 6-21 survey period.

The poll reflects to some extent the stance of Japan’s major business lobby, Keidanren, which advocates the need for nuclear power out of concern that high energy costs could force firms to move overseas, costing jobs and growth.

“It’s unrealistic for Japan to ditch nuclear power in 15 years or so,” one rubber company said in the survey. “It should inevitably become around 15 percent while we seek alternative energy sources for overage reactors.”

The poll compared with a government survey of nearly 300 people which showed almost half – by far the largest group – favoured the zero option.

Meltdowns at the Fukushima nuclear plant after the March 2011 earthquake and tsunami caused radiation to spew over large areas, forcing more than 160,0000 people to flee. In the following months, all of Japan’s remaining reactors were shut for safety checks. Two reactors resumed operations last month.

The Reuters poll found 85 percent seeking more strict safety standards and measures for restarting the rest of the reactors which remain shut, mostly for safety checks.

To cope with increased electricity costs amid a prolonged shutdown of reactors, 69 percent said they would cut expenditure and 36 percent would seek cheaper power suppliers, according to the poll, which allowed respondents multiple choices.

Underlining conditions of prolonged deflation, 26 percent said they would pass the cost on to their customers, while 13 percent would shift operations out of Japan, according to the poll.

Since last year’s disaster, 15 percent of firms have boosted in-house power generation, while 80 percent made no change in their power procurement, the poll showed.