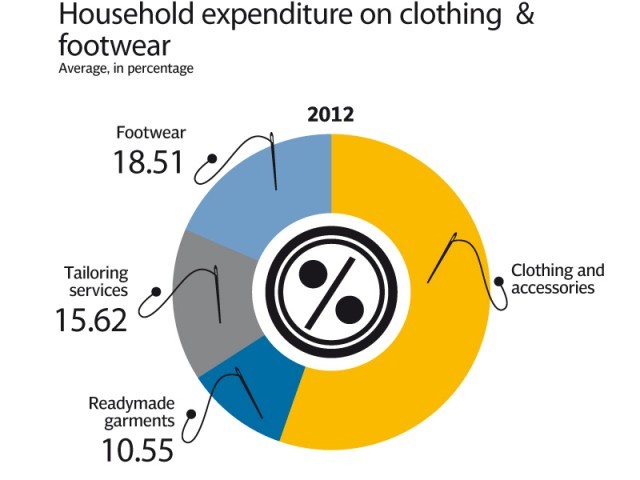 Pakistani consumers increasingly prefer to buy readymade garments, shifting their consumption away from tailored clothing, a phenomenon that has attracted many textile companies – including exporters – into the business of supplying clothes for the country’s middle class.

Data from the Pakistan Bureau of Statistics suggests that demand for readymade clothes has risen 81% in the last decade, in terms of quantity, despite high increases in the prices of clothes. The rise in demand may be attributed to the shift in consumer behaviour: urban Pakistanis have higher disposable income and have increasingly developed a ‘mall culture’, preferring to browse for clothing at retail outlets and buying in one go rather than going for several fittings to a tailor.

“It is the shopping environment and convenience which brings us the customers,” said Tabish, who works for RK Style, a readymade garments shop at a mall in Karachi. “We get B-quality branded clothes that have minor defects but still people buy these clothes happily,” he said. “For someone earning about Rs15,000 to Rs20,000 a month, buying a Rs1,500 jeans is not a big deal.”

Tailors, hitherto the mainstay of Pakistan’s garment sector, are facing a hard time in urban areas. “About 85% of our customers have now switched to readymade garments,” said Abdul Sami, a tailor in Karachi. “There is not much difference in price and buying readymade garments is hassle free.”

It does not help that tailors often find their workshops without power, hampering their ability to meet orders on time. And the one big advantage of tailored clothing – that they fit better – is at least being partially negated by the fact that virtually all retail outlets selling readymade garments offer alteration services. Many tailors – faced with a falling customer base and labourers deserting them for steady employment at textile factories – have now begun investing in backup generators.

Many are also unabashed about stealing other people’s intellectual property rights. “We have also started copying famous designs popular on internet to win back the customers lost to readymade garments market,” said Danish Khan, a tailor in a working-class neighbourhood in Karachi.

Designer clothing appears to be a trend that has caught on like wildfire among Pakistani consumers, a phenomenon that seems to underlie the growing popularity of designer lawn, particularly popular among middle class and upper income consumers.

“The electronic media and the internet have led customers in cities like Hyderabad, Multan, Faisalabad, Sialkot, Peshawar and Gujranwala to be just as informed and sophisticated consumers as those in Karachi, Lahore and Islamabad,” said Farrukh Mian, CEO at Textile Link, a company that works with 12 designers and distributes its clothing products in 32 cities nationwide.

Meanwhile, the rise in domestic demand for readymade garments is rapidly beginning to attract the attention of textile exporters, who often find the local market easier to work with than their more demanding international clientele. Between 2006 and 2010 (the latest year for which data is available), local sales revenues of clothing manufacturers listed on the Karachi Stock Exchange jumped by an average of 29% per year, much faster than even their own export sales, which rose by about 22% per year during that period.

Part of the motivation to move out of the export market is the energy crisis, which has made it difficult to meet the deadlines set by international retailers, who often have a “just-in-time” business model to minimise inventory costs. Power outages make it difficult to keep production running and meet deadline. And not being able to deliver in time to a foreign retailer often means permanently losing their business.

“The international market has higher margins than the local market, but since many exporters cannot meet their deadlines, they might as well sell to the local middle class, which is beginning to consume more,” said Mushtaq Cheema, CEO of MSC Textile in Faisalabad.

“Several textile companies already have sophisticated retail operations, such as Chenab Textiles, which owns the ChenOne brand. Firdous, Dawood and Sitara Textile all have their own lawn brands as well and have gotten a great customer response,” said Rehan Naseem, CEO of Umer Textile in Faisalabad.

(With additional reporting by Imran Rana in Faisalabad)