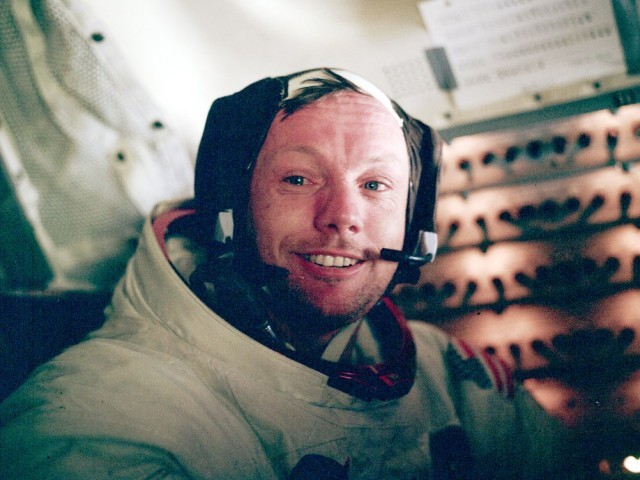 As commander of the Apollo 11 mission, Armstrong became the first human to set foot on the moon on July 20, 1969. PHOTO: NASA.GOV

US astronaut Neil Armstrong, the first person to set foot on the moon, died after suffering complications from cardiovascular surgery, his family said Saturday. He was 82.

Praising Armstrong as a “reluctant American hero,” his family said in a statement that he had “served his nation proudly, as a navy fighter pilot, test pilot, and astronaut.”

He and fellow Apollo 11 astronaut Buzz Aldrin landed on the moon on July 20, 1969, before the eyes of hundreds of millions of awed television viewers worldwide. His first words upon stepping on the lunar surface have since been etched in history: “That’s one small step for (a) man, one giant leap for mankind.”

An estimated 450 million people watched the grainy black and white broadcast that showed Armstrong, clad in a white space suit, climb down the lunar module’s ladder onto the Moon’s desolate surface.

Born in Wapakoneta, Ohio on August 5, 1930, Armstrong had an early fascination with aircraft and worked at a nearby airport when he was a teenager. He took flying lessons at the age of 15 and received his pilot’s license on his 16th birthday. A US Navy aviator, he flew 78 missions in the Korean War.