Tribes­men invite­d to partic­ipate though date not fixed yet.
By Our Correspondent
Published: August 26, 2012
Tweet Email 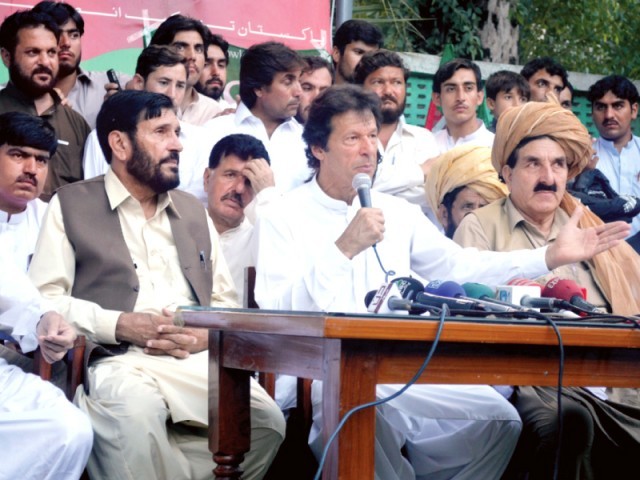 Imran Khan has vowed to march to Waziristan to show solidarity with locals. PHOTO: SANA

Pakistan Tehreek-e-Insaf (PTI) chairman Imran Khan on Saturday invited local tribesmen to participate in his party’s planned peace march to Waziristan, insisting that locals were supportive of his plan.

He vowed to fulfill his promise of marching to Waziristan in a show of solidarity with the local people of the tribal region, adding that it was to disseminate the message of “peace” in the tribal region of Pakistan among those who have been facing militancy for years. “The people of Waziristan are supportive of our peace march,” said Imran.

“The march will expose to the world that killings being perpetrated by the US which is incessantly violating international laws and directly violating Pakistan’s sovereignty,” said the PTI chairman. Speaking to the media, he said the long march to Waziristan would take place at all costs. “We will not budge on this mission,” he added.

PTI has yet to decide on a specific date for their long march, Imran said, adding that a committee is looking into the matter. Responding to a question on security for his delegation, Imran said local tribesmen will arrange security and will decide which route should be followed to take the convoy to South Waziristan.

The PTI chairman said a convoy of local and international journalists would also be taken along to the tribal regions in the peace march. Imran emphatically stated that PTI will never let any individual or foreign power play with the fate of Pakistan, “which has a very important geostrategic position in the region.”

“A military operation in North Waziristan could only be successful if locals were taken into confidence,” he added.

Addressing the hot-button issue of drone strikes in the region, he asked why Pakistan had not raised the issue at an international level. Slamming the resurgence of consecutive US-led Nato drone attacks near the Pak-Afghan border, he urged the government to lodge a complaint with the United Nations Security Council.

“There have been 12 drone attacks in the last 24 hours. The government should name the terrorists who they claim have been killed in these attacks,” said Imran.

“No war can be won without the support of local people and hence PTI proposes a comprehensive debate in the parliament in light of consultation with esteemed tribal leadership,” the PTI chairman said.

He also told the media that Article 4 of the Constitution holds the government responsible for the protection of lives, property and reverence of the masses, adding that the government had failed to uphold the clause.