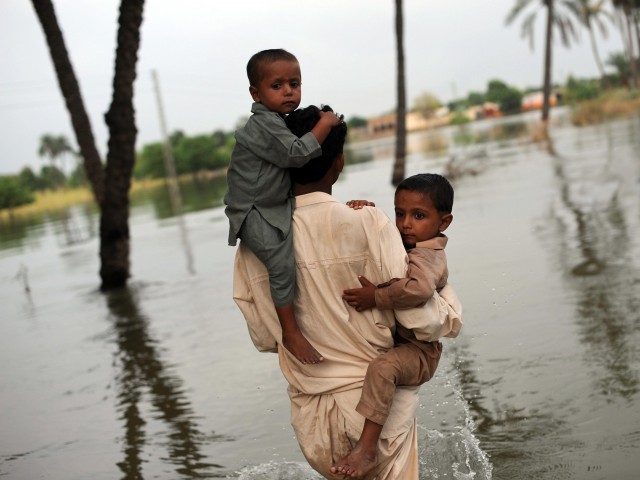 A Pakistani flood affected villager carries two boys as he walks through water in Baseera on August 24, 2010. PHOTO: AFP

ISLAMABAD: Minister for Science and Technology Azam Swati revealed that his ministry would be able to produce safe drinking water for 20 million flood victims free of cost. In a press conference held here, the minister urged aid agencies, NGOs and the civil society to approach the science and technology ministry for the provision of safe water free of cost  instead of spending excessive amounts of money on branded water. The saved amount can then be used to fund other relief activities.

The minister referred to the shortage of drinking water as the most crucial emergency which needs to be dealt with immediately. In addition, the ministry has developed a baby formula food supplement which according to Swati has all the required nutrients for infants in the flood affected areas and can be produced at a fraction of the cost of alternatives currently available in the open market. The baby formula will also be available free of cost. The ministry is currently working to raise funds for this purpose.

A department within the ministry, The Pakistan Council for Research in Water Resources (PCRWR), has deployed a total of twenty field teams in all four provinces. The department is responsible for the provision of water as well as for the safety testing of existing sources.

Despite the limited annual budget of the federal ministry, which is a meager Rs1.2 billion, Swati was confident that his ministry’s departments had the capacity to produce more than sufficient quantities of safe drinking water.

The Pakistan Council for Science and Industrial Research (PCSIR) has also been producing and dispatching different food stuff, water purification sachets, high energy biscuits, ORS and herbal medicine all of which have been produced in-house.

The minister made a plea to other ministries to think “out of the box” and find innovative ways through which the affliction of the millions suffering due to the floods could be eased.

The Ministry of Science and Technology till now has supplied over 37 million litres of water and 3,000 “Aqua Tabs” to the flood affected areas (market value at Rs110 million). At same time, it has imparted training for chlorination of water to army officials, while also maintaining close coordination with international agencies OXFAM, Doctors without Borders, USAID and WHO.