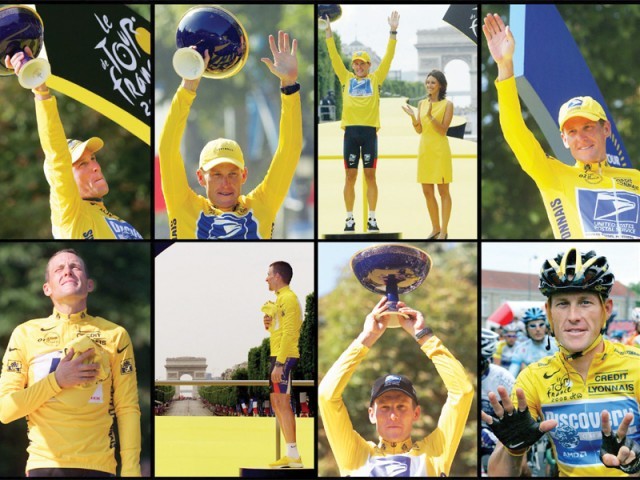 Cycling legend also banned for life by the US Anti-Doping Agency.

COLORADO SPRINGS: Iconic US cyclist Lance Armstrong was officially branded a drugs cheat on Friday by the US Anti-Doping Agency as it stripped him of his record seven Tour de France titles.

Armstrong was also banned from cycling for life by the agency, which said his decision not to pursue arbitration in an effort to clear himself of doping charges levelled in June triggered the action.

“US Anti-Doping Agency (USADA) announced today that Armstrong has chosen not to move forward with the independent arbitration process and as a result has received a lifetime period of ineligibility and disqualification of all competitive results from August 1, 1998 through the present, ” USADA said in a statement.

Armstrong has long denied doping accusations but announced on Thursday night that he wouldn’t pursue an arbitration process he believes is “unfair”.

“Finished with this nonsense, ” Armstrong said. Armstrong had attempted to block USADA’s proceedings against him with a lawsuit, but it was dismissed on Monday. That gave him until Thursday to respond to USADA’s charges.

Nike Inc plans to continue to support Lance Armstrong even after the seven-time Tour de France cycling champion is stripped of his titles for deciding to no longer fight charges of doping, while bicycle maker Trek is analysing the situation.

“Lance has stated his innocence and has been unwavering on this position. Nike plans to continue to support Lance and the Lance Armstrong Foundation, a foundation that Lance created to serve cancer survivors, ” Nike said in a prepared statement.