Police frustr­ated over blocke­d access to record­s and compan­ies not pushed to help.
By Faraz Khan
Published: August 24, 2012
Tweet Email 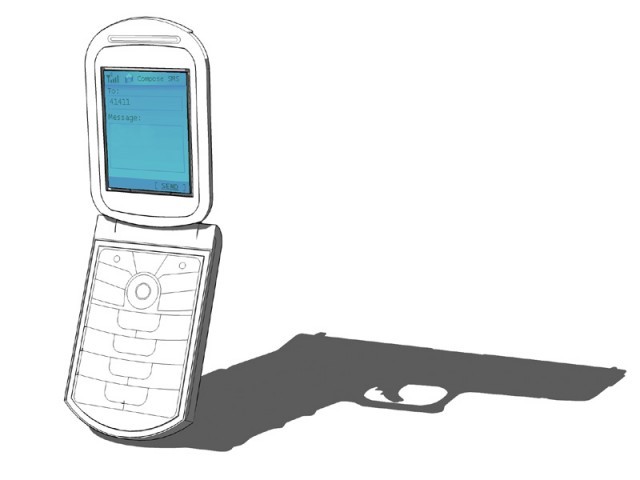 Police frustrated over blocked access to records and companies not pushed to help۔ DESIGN: ESSA MALIK

When Frank Costello, better known as the prime minister of the underworld, used to run the streets of New York City, extorting money was a fairly simple game – his men used to go door to door revealing a weapon concealed in their jackets.

Up until now in Karachi, extortionists have kept it just as simple. A slip of paper here, a telephone call there. And when this cajoling doesn’t work, a hand grenade usually does the trick. No one ever really gets hurt. But times are changing which is why they have gone high-tech with phone credit transfers and e-banking.

You do not need to have a SIM from a network provider or even a phone, just valid identification for this to work. To send the money, all you need are identity cards, their numbers and a five-digit secret code.

For the authorities this complicates policing. If it was difficult to arrest suspects before, it has become virtually impossible now, especially since no one wants to come forward and register a complaint. According to the police, so far this year nearly 700 complaints were registered but that was just a fraction of the victims. It doesn’t help that they don’t have legal access to cell phone records either.

“The phone credit transfer and e-banking has created a lot of problems for us. It was supposed to help people, but is being misused,” said deputy police chief Iqbal Mehmood. “This situation can take a turn for the worse if we don’t act but our hands are tied. We cannot do anything till others, including the victims and mobile network operators, help us.”

Extortionists use fake identities to buy SIM cards which is why the police need mobile network operators to help catch them.

A case involving an alleged extortion attempt on a SUPARCO employee is currently being heard by an anti-terrorism court. The suspect is believed to have made the extortion threat over the phone and ask for the money to be transferred via the phone credit transfer facility.

Why the police want you to say ‘no’

For the authorities, this scam is risky as there is no direct or physical contact with the perpetrator when the threat is made or when the money is collected. They fear that the system is so user-friendly that the average person could get greedy.

Their fears came true when working with the Citizens-Police Liaison Committee. The police have arrested two teens wanted in eight extortion cases in Sharae Noor Jahan.

Intermediate students Musavir Alam and Arsalan were threatening their relatives and extorting money from them. “I had to give Alam Rs10,000 but I did not have the money,” said Arsalan. “I thought I could call my grandfather and scare him into giving me the money.” Once this worked, they started working other relatives and used the computerised national identity card of a dead political party worker to collect the money.

“The phone credit transfer and e-banking facility has made it so easy to extort money,” said a CPLC official. “It has made every second citizen in the city a victim. You and I may never know, but someone in my house could also be a victim.”

The problem is compounded by a lack of verification when people buy SIM cards from outlets. “We are not the police,” shrugged one employee. “We are just here to help customers. It is up to the police to investigate and arrest the suspects. We have nothing to do with this.”

But it appears that the mobile network operating companies may be waking up to reality. One company’s spokesman, Affan Haider, told this newspaper that while these services were aimed at helping people they would act as far as extortion was concerned. But this too is contingent on people filing official complaints with the company. For now it seems as if the victims are as silent as the transactions.