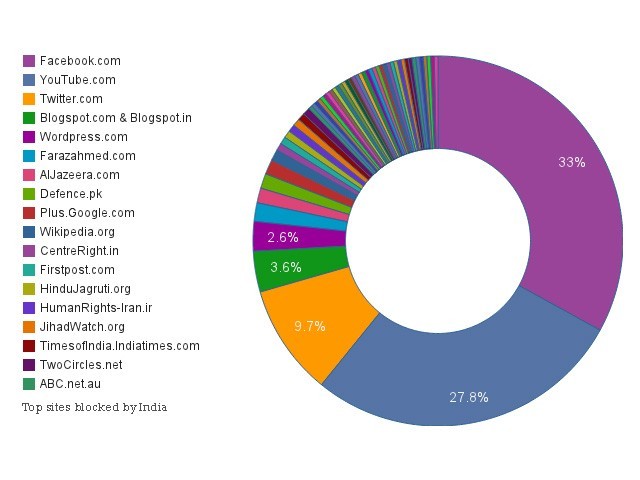 The Government of India had blocked the URL of a blog hosted on The Express Tribune exposing a social media campaign seeking to inflame Muslims regarding the violence against the Rohingya in Burma. The blog was reportedly among 309 other URLs blocked for a short period by the Indian government in the wake of the lower Assam riots.

Ironically, the blog by Faraz Ahmed had exposed how people on Facebook and Twitter were using wrong captions for photos from Southeast Asia to portray that Muslims were being killed by the Burmese government.

According to the website of Centre for Internet and Society (CIS), almost “all of the blocked items have content (images, videos, writings) that are related to communal issues and rioting”.

Pranesh Prakash, a CIS official, said that the blocking of many of the URLs was “legally questionable and morally indefensible”.

The list also contains websites that are believed to be sympathetic to Hindu and Muslim radical groups, and some mainstream media websites.

The Indian government had also earlier claimed that false rumors of revenge attacks for violence against Assam Muslims which led to an exodus of people from northwest India were initiated in Pakistan.

Defence.pk is also another Pakistani website that was blocked by the Indian government. An administrator of the website informed The Express Tribune that they were facing Distributed Denial of Service Attacks (DDoS) since the list had been leaked.

The administrator said that this was the largest attack since the website had been launched, adding that conducting such an attack was a costly affair and that it proved that someone with enough resources was behind it. They added that tracing the sources was not possible unless a high profile agency conducted an international investigation.

The administrator hoped that the Indian government would reconsider the block as they were not doing “anything shady” and were upholding “noble ideals”.